The Camera as Eyewitness: An Everyday Portrait of the Bartows

An exciting discovery was made at Bartow-Pell a number of years ago. Lurking in the dusty shadows at the back of a closet was a large, long-forgotten photograph. History detectives will appreciate the delight of Bartow-Pell Curator Emerita Mary Huber when she unearthed this treasure, which is the only image we have of the mansion and some of its inhabitants during the Bartow era.

The photograph’s composition recalls a “conversation piece”— an art-historical term for an informal group portrait in which the subjects interact or engage in various activities in an outdoor or domestic setting. Although the Bartow group seems casual, the mise-en-scène was probably carefully staged by the photographer, who created an interactive story within a balanced composition that contrasted dark and light areas to enhance visibility. The image also follows a long tradition of depicting homeowners against a backdrop of their residence.

When was the photograph taken? Who are the people in it? What can we learn through close observation of the sitters, clothing, building, and landscape? This intriguing picture can tell us a great deal.

The date of our albumen print is about 1870, but how do we know that?

Fashion plate from The World of Fashion and Continental Feuilletons, July 1870

First, let’s look at the clothing. Details are hard to see, but the women’s skirts—although full—do not have the enormous width of the late 1850s and the Civil War era, nor do they have the narrower silhouette that came into style in the mid-1870s. The woman seated on the steps has arranged her abundant tresses (which might have included false hair) in a large and low style, and she wears a small bonnet. Old-fashioned daycaps, like the one on the woman at the right, had been worn only by older women for quite some time. The little girls wear full-skirted white dresses, perhaps with whitework embroidery. We see black kid boots on one of the young girls, and the edges of her pantalettes are just visible below her hemline. The little boy wears short trousers, although he probably stopped wearing a dress only recently, as dresses were worn by all very young children. The gentleman’s attire includes a sack jacket, a vest, and a wide necktie. (If you are interested in learning more about your own historic photographs, an excellent reference book is Dressed for the Photographer: Ordinary Americans & Fashion, 1840–1900 by Joan Severa.)

Some members of the Bartow household

Next, we need to check the census to see who was living at the mansion in 1870. The head of household was sixty-nine-year-old Maria Lorillard Bartow (1800–1880). Her husband, Robert Bartow (1792–1868), had died two years earlier and does not appear in our photo, which could mean that it was taken after his death. The Bartows’ daughter Clarina (1838–1898) is also listed in the household, along with five of her six children—Maria, eight; Bessie, six; James H., four; Duncan, two; and Clarina, three months. (A sixth child was born later.) Clarina’s husband was the Reverend James Hervey Morgan (died 1876), but the 1870 census tells us that he was living with his parents, Rev. and Mrs. Richard U. Morgan, in a New Rochelle boarding house (the elder Rev. Morgan was the rector at nearby Trinity Church). This does not mean that the couple had marital problems. Evelyn Bartow relates in the Bartow Genealogy (1875) that Clarina’s five oldest children were born in Pelham, where the Bartow mansion was located. (This section of Pelham later became part of the Bronx.) It makes sense that Clarina gave birth at her parents’ house to benefit from household and childcare help, along with her mother’s support. Research indicates that the Morgans lived in New York City, so the older children probably enjoyed spending time at their grandparents’ lovely country estate. The Bartows’ youngest daughter, Henrietta (1843–1902), and all of their surviving sons lived at home in 1870—George (1828–1875), Reginald (1842–1888), and Theodoret (1846–1891). Seven servants—six of them Irish-born—rounded out the household. There were so many people in the house that there may have been no room for Clarina’s husband.

So who is in the photograph? Using our clues, we can draw the following conclusions. The older woman is Mrs. Bartow. Her daughter Clarina Bartow Morgan is seated on the steps and looks back at her eldest son—and husband’s namesake—James Hervey Morgan. The two little girls are Clarina’s eldest daughters, Maria and Elisabeth (“Bessie”). The young woman in a simple dress standing by the little boy is probably one of the Irish servants (perhaps she helped with the children). Maybe it is Kate Marshall or Annie Regan, who were both in their twenties at the time. Finally, we have the hard-to-see gentleman at the right. Is he Clarina’s husband or one of her brothers? 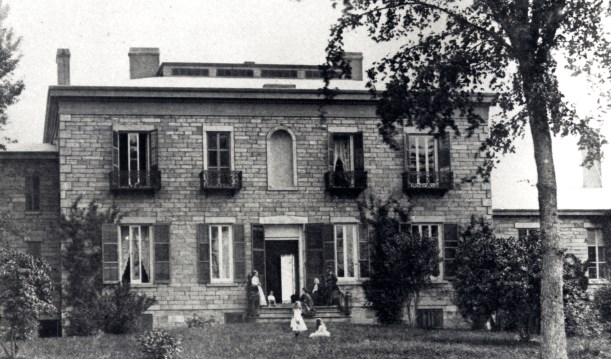 Illustration from Beautiful Homes; or, Hints in House Furnishing, 1878

Visitors often ask us about the niche above the front door. Was a sculpture ever there? Probably not, since the space is empty in this photograph. The windows and doors are interesting elements. You will notice that some of the exterior shutters are closed, which would never happen today, as our shutters are purely decorative. Before window screens, exterior louvered shutters provided ventilation, light, protection from the elements, and privacy, especially during the warmer months when windows were open. We even see shutters on the front door. To further cool the house and encourage cross-ventilation, both the front door and the French windows in the north parlor are open to catch breezes from Long Island Sound. Embroidered muslin or lace undercurtains can be glimpsed in some of the windows and were probably used in tandem with more elaborate draperies.

Finally, the photograph shows us what some of the landscaping looked like at this time. The lawn came right up to the steps leading to the front door, and the carriage drive runs straight across the lawn, probably making a circular route back to Shore Road. The current parking lot in front of the building did not exist until much later, as it would have been difficult for carriages to turn around in a small space. The shrubs are planted in a haphazard way, and there appear to be no flowerbeds near the house. A vine, probably ivy, is starting to cover some of the façade.

This special image reminds us that today’s museum was yesterday’s family home, where life’s happenings—mundane to momentous—unfolded for three generations. Because Robert and Maria Bartow’s family line seems to have died out and most of their photo albums, letters, and other mementoes have been lost, we must use our imagination to fill in the blanks. Luckily, this photograph has survived to tell part of the story. 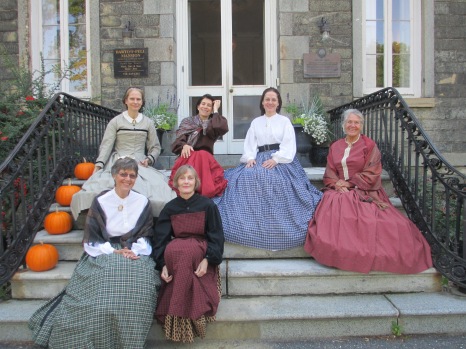 BPMM docents pose on the front steps about 150 years later.

5 Responses to The Camera as Eyewitness: An Everyday Portrait of the Bartows