What’s a Girl to Do? Nineteenth-Century Lifestyle Guides for Young Ladies 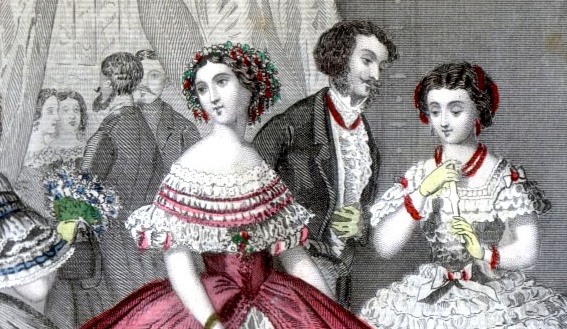 To quote pop star Cindi Lauper, “Girls just want to have fun,” and it was often the same in the nineteenth century. Plus ça change, as they say. There were just a lot more rules back then. And let’s not forget the moral high ground. Henry James’s Daisy Miller and Thackeray’s Becky Sharp wanted to have a good time, but look where their high-spirited ways got them.

A selection of nineteenth-century etiquette manuals

Etiquette, deportment, and behavior manuals abounded in nineteenth-century America. These didactic guides helped instruct the expanding middle and upper classes on proper manners and “true politeness,” starting at a young age. New parlor furniture wasn’t enough for a family of means; the right kind of social behavior was also required to attain “perfect gentility.” Eliza Leslie, Emily Thornwell, Mrs. John (Eliza) Farrar, and Louisa C. Tuthill are a few examples of authors who wrote in this popular genre. Although Bartow-Pell does not have any volumes from the Bartows’ original library, it is quite possible that their daughters, Catharine (1830–1907), Clarina (1838–1898), and Henrietta (1843–1902), owned this sort of book. Conduct, conversation, fashion, hygiene, social occasions, and letter writing are common subjects. Some advice still resonates, but for modern readers, the rest can range from anachronistic to humorous. In this post, we are going to take a look at some selected do’s and don’ts for mid-nineteenth-century young ladies.

This upstairs room at Bartow-Pell is interpreted as Clarina Bartow’s bedchamber when she was a teenager in the 1850s. The dress is from the late 1830s.

Eliza Leslie (1787–1858) was a prolific American author who wrote books on etiquette and housekeeping, cookbooks, and fiction, as well as articles for magazines such as Godey’s Lady’s Book. In 1831, she published American Girl’s Book: or, Occupation for Play Hours. The opening pages, which could easily depict the Bartow family, describe a mother arriving home from the city by steamboat and bringing a copy of the American Girl’s Book as a present for her daughters. “I wish we had possessed this book before we went to Georgiana Howard’s birth-day party, where nothing was thought of but playing on the piano and dancing, just as if the company were all ladies and gentlemen,” exclaims one of the girls. “Besides, we have enough of music and dancing at school.” Eliza Leslie clearly did not think that girls should be treated as miniature adults; rather, she wanted them to enjoy childhood pastimes and informal learning through sports, games, riddles, “amusing [needle]work,” and crafts. Frog in the Middle, Track the Rabbit, and other energetic games encouraged physical activity; charades, conundrums, and card games used cognitive skills; and imaginative needlework projects—such as making reticules and pincushions—fostered creativity and sharpened fine motor and sewing skills. 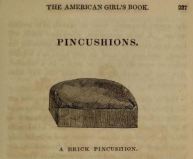 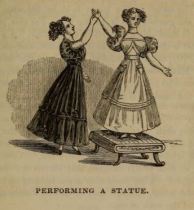 As girls entered their teens, expectations for their behavior changed, prompting plenty of advice from authors. Here are some examples.

So long as gentlemen admire small waists and praise those figures the most which approach the nearest to the shape of a wasp, or an hour-glass, it is in vain to tell young ladies that the practice is destructive of health, and that there is no real beauty in the small dimensions at which they are aiming. . . . Let mothers, too, make a stand against this general perversion . . . let them keep their daughters without corsets until they have attained their full development of figure.

And here is what Mrs. Farrar had to say on revealing evening gowns:

No woman can strip her arms to her shoulders and show her back and bosom without injuring her mind and losing some of her refinement; if such would consult their brothers, they would tell them how men regard it.

In The Lady’s Guide to Perfect Gentility (1856), Emily Thornwell admonished readers against wearing thin silk or muslin gowns, “flimsy silk stockings and slippers of a scarcely more substantial material,” and bare shoulders as “they sally forth into the damp and chilly air of the night . . . shivering with cold” on their way to an evening ball or party. “One cause of the alarming prevalence of consumption among the females in this country may, we suspect, be traced to” such behavior, Thornwell proclaimed.

Eliza Leslie, writing in The Behaviour Book: A Manual for Ladies (1853), expressed these views about young ladies “flirting with beaux” at church:

We are sorry to see young ladies, on their way to church, laughing and talking loudly, and flirting with the beaux that are gallanting them thither. It is too probable that these beaux will occupy a large share of their thoughts during the hours of worship.

Miss Leslie offered many other instructions to her youthful readers and their mothers, including the following “bad practices . . . not to be done”:

Slipping a ring up and down your finger. Sitting cross-kneed and jogging your feet. Drumming on the table with your knuckles, or, still worse, tinking on a piano with your fore-finger only. Humming a tune before strangers. Singing as you go up and down stairs. Putting your arm round the neck of another young girl, or promenading the room with arms encircling waists. . . . Slapping a gentleman with your handkerchief or tapping him with your fan. Allowing him to take a ring off your finger, to look at it. Permitting him to unclasp your bracelet, or, still worse, to inspect your brooch.

The author also cautioned readers against silly trends, “even if they have been introduced by a belle and followed by other belles”:

During the Jenny Lind fever, there were young ladies who affected to skuttle into a drawing-room all of a sudden, somewhat as the fair Swede came skuttling in upon the concert stage.

“Girls often bring from the boarding-school a sort of school slang, which they have sported among themselves,” Louisa Tuthill grumbled in The Young Lady’s Home (1847). Eliza Leslie was even more severe on this subject, rebuking young ladies who “try to excite laughter and attract the attention of gentlemen by talking slang. Where do they get it? How do they pick it up? From low newspapers, or from vulgar books? Surely not from low companions?” Heaven forbid! 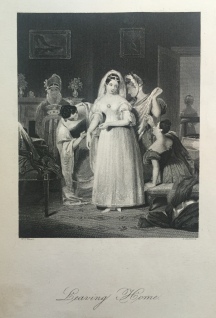 Just like countless Victorian novels, this post ends with the subject of marriage. Many authors offered matrimonial advice. Louisa Tuthill warned against infidels, immorality, narcissism, old men, curmudgeons, extravagance, idleness, tyrants, and “sour creature[s], who would turn the cream in my coffee by looking at it.” Mrs. Farrar, on the other hand, tried to avoid the topic:

Another reason for my not entering fully into the subject of love and matrimony is that every book of advice for young ladies is full of it, and you can easily find it elsewhere. It is the principal material in every novel and tale, and the best fictions of our day hold up to view the mistakes and faults which young persons are most likely to commit in a more impressive manner than can be done here.