Posted on February 4, 2017 by mansionmusings

Isle of Barra, view from the summit of Heaval. © Copyright Chris McLean and licensed for reuse under Creative Commons

The Isle of Barra, a remote windswept island in Scotland’s Outer Hebrides, is a world away from Bartow-Pell and New York City, but there is a fine story to be told about these two places and their forgotten connection.

In 1936, Bartow-Pell was the headquarters of the International Garden Club, which had been formed in 1914. The club’s agreement with the New York City Parks Department required that the IGC restore and maintain the house and garden. In return, the organization’s well-heeled members were allowed to use the Pelham Bay Park mansion as a center for their horticultural, social, and public activities. The group’s founders also agreed to provide instruction to “teachers for Public School Gardens” and “to assist other Horticultural Societies and Garden Clubs.” 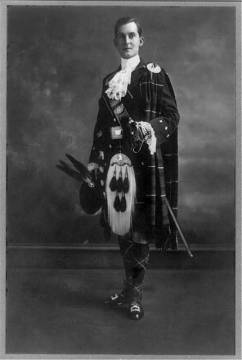 On September 6, 1936, the New York Times announced the marriage of IGC member Marie Stevens Hicks (1887–1952) to her second husband, Robert Lister Macneil (1889–1970), the Macneil of Barra, an American architect who was the forty-fifth chief of his clan. The bride, who had a distinguished pedigree, was the wealthy widow of a U.S. congressman. Thanks to the generosity of the new Mrs. Macneil, in 1937 the newlyweds bought the romantic ruins of Kisimul Castle on the Isle of Barra, the ancestral home of the groom’s clan.

While her husband was busy with plans to restore the castle, Marie Macneil took a keen interest in the local people and their needs. On her first visit to the island in 1936, she had discovered that there was a severe shortage of fresh vegetables, and she decided to do something about it by creating the Barra School Children’s Garden Competition for the seven schools in the community. In 1938, Marie Macneil secured assistance from the International Garden Club, which she felt should support projects that were in line with its mission to educate people about gardening and to support horticulture on an international level. In addition to her time, passion, and energy, Mrs. Macneil also donated her own money.

Marie Macneil later described the project in a lecture at the Pasadena Garden Club:

Upon my first visit in 1936 to those remote Outer Isles, I had found the usual British diet—boiled mutton, boiled potatoes, and sometimes boiled onions. No green vegetables, and masses of that ghastly store bread, hampers of which were arriving by the tri-weekly boat from the mainland. I decided to set up a garden competition among the school children there and spent in the beginning one pound on the seeds for the seven schools . . . and gave a pound to each school as prizes. The Scottish press got hold of this and . . . a clipping was sent to the President, Mrs. Eliot Tuckerman, of the International Garden Club of New York, who asked permission to aid the plan by having the Club send a medal the following year to the first prize winner of each of the schools and a cup to be competed for by the seven schools, the one winning this three times to retain the trophy.

Students ages 12 and above were invited to plant 14-square-foot vegetable gardens on the “best ground which can be spared on the croft [farm or field] as regards soil and position . . . well drained, sunny, and protected from the full force of the wind. It should also be protected by fences or wire-netting from cattle, dogs and hens, and there should be no danger of the sea coming in at an exceptionally high tide.” Composting was strongly encouraged, and fertilizers were made from chicken, cow, horse, and sheep manure along with seaweed. No commercial products were allowed. With funds from Mrs. Macneil and the IGC, seeds were purchased from local suppliers or sent from New York by boat.

This year the number of gardens was doubled, between forty and fifty having been started. Of these, only one or two had been neglected; a few had been destroyed by cattle raids, and one by the sea . . . The vegetables included potatoes, turnips, carrots, cabbages, Brussels sprouts, cauliflower, beetroot, leeks, lettuce, and parsley. . . . Some of the mothers, however, admitted that beetroot was not popular in the household and others that they did not know what to do with the Brussels sprouts. F. Marian McNeill, “The Cottage Garden: A Hebridean Experiment,” The Scotsman, September 26, 1938

According to the guidelines, “Marks will be awarded for neatness, sensible planning and absence of weeds as well as for quality of crops.” The students in each school placing first, second, and third won cash prizes from Mrs. Macneil, and those in first place also got a bronze medal from the IGC. In addition, the rules stated: “The Department of Education will buy for the school canteens, at a fair price, any surplus from the children’s gardens not needed by the children and their families.”

A local committee oversaw the program and was led by a director on a small salary contributed by Mrs. Macneil. The heads of the schools were Regional Directors, and local authorities and horticultural experts served on an advisory council, including Lady Eve Balfour (1898–1990), a British innovator in organic farming and influential author of The Living Soil, and F. Marian McNeill (1885–1973), the Scottish folklorist and author of The Scots Kitchen.

During World War II, it was “impossible to keep up this individual activity,” Mrs. Macneil later recalled. But other projects also needed her attention. She wrote: “I turned my mind to the reclaiming of as much acreage as possible, not only on Barra . . . but also on the two islands immediately north. . . . While launched upon this endeavor to reclaim and produce (for which I borrowed the money from the bank) we grew literally tons of carrots.”  She explained: “Carrots . . . are of inestimable value not only for the stored vitamins for people living in a sunless community but help . . . in mitigating blackout sickness and became essential I understand for aviators flying by night.” In 1940, she also organized and chaired the Scottish Clans Evacuation Plan “to aid child evacuation from the bombed areas of Britain,” according the New York Times. On February 7, 1942, the Times was able to report that “already more than 100 children are housed in the Inverness-shire castles of Moy Hall and Corrimony House, and Balmacaan, nearby, has just been made available.” Her friend, supporter, and IGC President Mrs. Eliot (Mary) Tuckerman was chairman of the evacuation plan’s New York City committee.

“During the war years there were upheavals in my own life which caused me to believe I would never wish to return to the dear island,” Mrs. Macneil reminisced. (She and her husband divorced in 1942.) “Then when the world food situation became so acute, I wrote to our local banker on the island to ask him to ascertain whether any of our island children would like to have me resume the garden competition.” In 1947, the contest was back in business and continued with the support of the IGC until 1952, the year of Marie Stevens Macneil’s death.

In 1951, Mrs. Macneil reported that since the beginning of the competition in 1936, “and in spite of the intervening war years . . . 400 or 500 school gardens have been made.” The island’s physician, Dr. Norman MacKinven, praised the program: “I feel I must write to say what a splendid plan the vegetable cultivation by the children is. There is, I am sure, not a corner of Scotland where it is so much needed. The diet of scones and Glasgow bread . . . plays havoc with children’s teeth and adults’ digestive systems here to an appalling extent.” In 1951, Craigston School took possession of the IGC’s grand prize silver cup “for keeps” because it had won the competition three times.

The Children’s Garden at Bartow-Pell.

Bronx schoolchildren at Bartow-Pell with their garden bouquets.

Today, Bartow-Pell is proud to continue the tradition of organic gardening for children that was championed by Marie Stevens Macneil on the island of Barra so many years ago. Since 2012, BPMM’s Children’s Garden has grown and flourished under the expert care of horticulturalist and educator Lauren Gill, who uses the garden as a hands-on outdoor classroom to teach New York City schoolchildren and others about plants, sustainability, and healthy food in the 21st century.

Materials relating to the Barra school gardens were unearthed when Bartow-Pell’s archives were catalogued in 2013, thanks to a grant from the New York Preservation Archive Project’s Archival Assistance Fund.