They Will Do It Anyway: Bloomers, Cycling, and the New Woman

Posted on October 4, 2017 by mansionmusings

This post discusses an 1897 advertisement for bicycle tires in BPMM’s fall exhibition, The “Quiet Circle”: Women and Girls in 19th-Century America, on view until November 19. 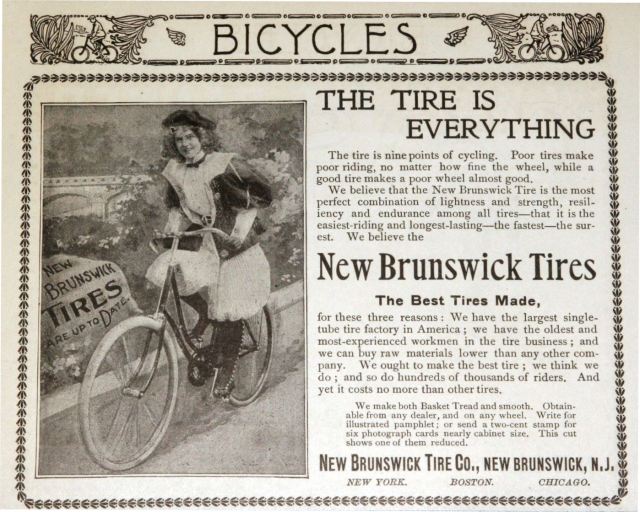 In 1898, the ex-governor of Ohio, Joseph B. Foraker, contributed to an article entitled “Shall Wheelwomen Wear Bloomers?” in which he proclaimed: “If women want to wear bloomers when riding a bicycle I don’t believe there is much use in objecting. They will do it anyway, so there is no special need of saying anything for or against the costume. . .  Women have a right, within the bounds of reason, to dress as they please, and personally I don’t care what they wear on the wheel.”

Illustration from The Model New Woman: A Study in Bloomers by George F. Hall, 1895

The so-called New Woman got people talking in the 1890s. A lot. All around America —from small towns like Garnett, Kansas, to big cities like New York—newspapers, magazines, books, stories, poems, sermons, and even popular music debated the merits of the New Woman, who rode a bicycle, wore bloomers, and had progressive ideas. Some people applauded her, others were contemptuous, a few were indifferent. She was often ridiculed. But she got people’s attention.

Bicycles were closely associated with the New Woman as a symbol of her freedom, modernity, independence, and athleticism. “New Woman’s Garb: Shall She Wear Bloomers or Retain Her Skirts? Widespread Discussion of and Deep Feelings Aroused by the Innovation,” in the New York Sun, was one of countless articles on the subject that were published around the country in 1895 at the height of the bloomer craze. The author quotes a suffragette, who says that “woman will ride to emancipation and equal freedom with man, full and complete, on a bicycle and in bloomers.” 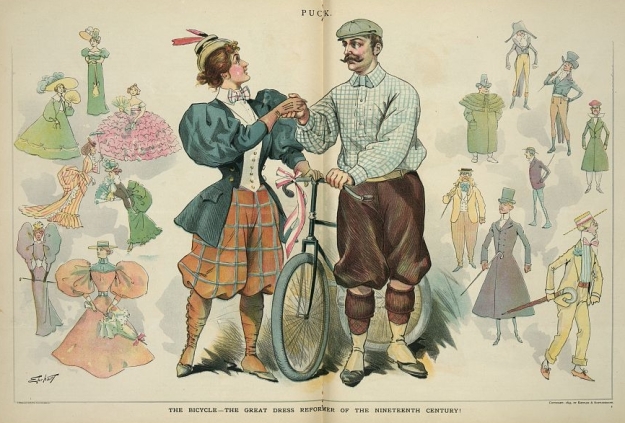 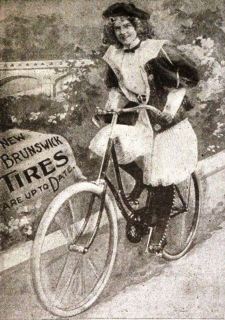 The 1897 bicycle tire advertisement in Bartow-Pell’s fall exhibition is for the New Brunswick Tire Company. This New Jersey firm, which was in the rubber business for sixty years before being sold in 1899, was one of a number of companies that ultimately became part of Michelin. In the ad, the words “up to date” appear next to a stylish bloomer-wearing cyclist, who energetically embraces her new wheels and the freedom they provide. Bicycle-related products were extensively advertised at this period and were good sources of advertising revenue.

Bicycle firms would cease to exist, or not exist so profusely, were it not for the fact that the “new woman” can be utilized to advantage in bicycle advertising . . . At any rate, it’s a fact that one-third of every magazine and journal is advertisements, and one-half that is the charming “new woman” astride a bicycle. . . . Bicycles sell well, and I am certain it’s due, largely, to the mode of advertising them. Dr. Caroline Peterson, “The New Woman,” Proceedings of the Iowa Pharmaceutical Association, 1896

This 1852 illustration from The Water-Cure Journal contrasts the sensible “American Costume” with trousers (left and right) with the tightly corseted, full-skirted, and impractical “French Costume” (center).

Bloomers, however, were nothing new. Beginning in the 1850s, “Turkish trousers” were sometimes worn under shortened dresses without tight stays as part of the reform-dress movement. In 1851, the outfits caused a public sensation after women’s rights activist Elizabeth Cady Stanton learned about the new style from her cousin, and the word spread. When Stanton’s friend Amelia Bloomer described the costume in her temperance and women’s rights periodical, The Lily, other journalists picked up the story, and the fashion soon took her name. At this time, these unconventional ensembles were worn by progressive, well-to-do women for comfort, health, and practicality and by some women, such as farmers’ wives and pioneers, as work clothes. The bicycling bloomer girl was at least a generation away.

The bloomer-wearing New Woman of the 1890s—whose persona was partly a reaction against the nineteenth-century idea of a woman’s “sphere”—elicited some strong opinions. For example, the New York Sun reported in 1895 that the Reverend T. B. Hawthorne of Atlanta accused women of “riding to the devil in bloomers” and preached that the craze was “born of infidelity.” But the Reverend John W. Shelton of Mason, Ohio, dismissed “the indignant protests of the scandalized anti-bloomerites in his congregation” by supporting the bloomer-attired organist who rode her bike to church in “a very sensible costume.” The reporter also wrote that many women were against bloomers. “Naturally this sentiment is not much evidenced in print, nor in public.” Julia Hemphill, whose essay was published in the 1895 Annual Report of the New York Institution for the Instruction of the Deaf and Dumb, called the New Woman a “fearless” American girl with “a cultured mind and a skillful hand” who was doing “great good” for the country. The author of “Bloomers,” a comic poem in The Opera Glass (1896), teasingly described modern young women from different states and the contents of their bloomer pockets—a flask for Kentucky’s maidens, a pistol for the cycling girl of Texas, a volume of Robert Browning for the bloomer girl of Boston, women’s suffrage speeches for the “daisy belle” of Kansas, and a “tutti-frutti pocket full of gum to mend her tire” for the Manhattan “bloomer damsel.”

Bloomers were often worn by female students for physical education classes, such as this “gymnasium costume” worn by students at Mount Holyoke College in 1893.  The Metropolitan Museum of Art owns some examples of similar gym suits.

Although many people agreed that bloomers were practical and comfortable, the costume was often deemed unattractive. Several prominent people talked about the look in “Shall Wheelwomen Wear Bloomers?”  A journalist, Cynthia M. Westover, called them “homely” and ugly. Miss Florence Dangerfield, a lawyer, disapproved of women being “mannish in appearance” and found bloomers “inartistic.” But not all individuals agreed. Oliver Sumner Teall, “society man, politician, and bon vivant,” said that “a pretty girl in bloomers is charming” and “so very killing”  when “she comes daintily along . . . leading her wheel.” Charles Dana Gibson, on the other hand, was not a fan, and although the Gibson Girl, like the Bloomer girl, was independent and athletic, Gibson’s statuesque beauties almost always wear dresses. A rare exception can be found in a satirical illustration entitled The Coming Game: Yale versus Vassar (1895).

Here is a small sampling of more remarks from contemporaries:

She has been defined as—
“A fresh darn in the original blue stocking”
“Man’s newest and best reason for remaining single”
“The New Woman,” Julia A. Hemphill, 1895

The dear new woman! I like her. Perhaps she is crude in her newness. Give her time.
From a Girl’s Point of View, Lilian Bell, 1897

It’s a rather difficult task to say anything original on such a threadbare subject as the “New Woman.” Poor “new woman!” She can be called old by this time. For the past two years, and even longer, she has been before the public. She has figured as the leading and shining light of our comic papers; she has been the favorite theme for the magazine editor to weave his editorials out of. Playwrights have written all sorts of plays wherein “ye new woman” was the leading star. . . . The “new woman” is a fake. She does not exist in flesh and blood; it’s only on paper you find her.
“The New Woman,” Dr. Caroline Peterson, 1896

Whether or not the New Woman of the 1890s really existed “in flesh and blood,” she can currently be found “on paper” at Bartow-Pell.

2 Responses to They Will Do It Anyway: Bloomers, Cycling, and the New Woman