Posted on October 19, 2017 by mansionmusings

This post discusses photographic portraits in Bartow-Pell’s fall exhibition, The “Quiet Circle”: Women and Girls in 19th-Century America, on view until November 19. 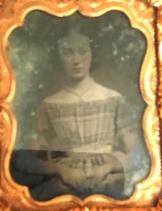 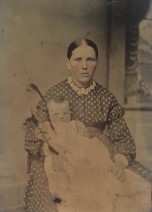 The faces look out at us. Their eyes lock ours. Long ago, they stared into a camera and time stopped. Who are the sitters in these haunting portraits?

Bartow-Pell’s fall exhibition includes several photographic portraits of anonymous 19th-century women and a young girl. The images are revealing, but most of the details of the sitters’ lives will probably always be an enigma. In any case, aren’t most of us intrigued by a good mystery? Isn’t that part of the legendary allure of the Mona Lisa, for example?

The daguerreotype introduced photography to Americans in 1839, and it must have seemed like a miracle. Although this process produced sharp and detailed images, the mirror-like silver surfaces were hard to read. Cheaper methods with better visibility, such as ambrotypes, tintypes, and cartes de visite, were developed in the 1850s. By then more and more people could afford to sit for the camera. 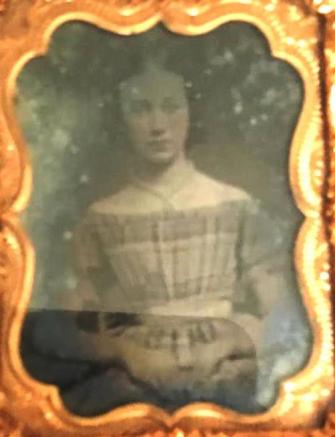 Let’s take a look at what may be the earliest portrait on display, an ambrotype taken in the 1850s or early 1860s of an unidentified member of the Dennis and Davis families, who lived near Hartford, Connecticut. (For an overview of ambrotypes and tintypes by the Library of Congress, click here.) The sitter is a girl who looks to be about twelve years old. She wears a light plaid dress (possibly for summer). Was it her favorite? The wide off-the-shoulder neckline for party dresses was popular with older girls from the 1840s to the 1860s. A heavy choker necklace with what is perhaps a large locket adorns her neck. Clearly, the young girl is from a well-to-do New England family, but other details are more subjective. She looks at the camera tentatively, and her hands rest demurely in her lap. Her facial expression and body language are timid, reserved, thoughtful, and even a bit anxious. But was she normally like this? Perhaps on that day, she was a little unsure about being photographed. After all, this was new technology in the mid-19th century. In addition, having your portrait taken was a special occurrence, and early photographs emerged from a long tradition of formal painted portraits in which serious expressions were acceptable. Furthermore, long exposure times made it difficult to hold a frozen smile, and poor dentistry probably didn’t encourage people to grin for posterity as we do in today’s toothy photos. 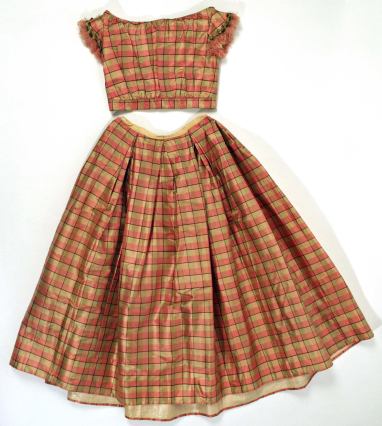 Tintypes were made on thin but sturdy metal sheets, which meant that the additional expense of brass mats, velvet linings, protective glass, and leather cases was merely optional instead of obligatory, as it was for daguerreotypes and ambrotypes, which were made with more fragile materials. There are two Civil War-era tintypes of women of modest means in BPMM’s exhibition.

The first tintype depicts a young woman, who is perhaps still a teenager, holding an infant. Her clothing is unassuming but tidy, and her hairstyle is plain and practical. She wears what was probably her best outfit—a simple day dress, made of printed cotton, with white cuffs and a dressy collar held in place by the ubiquitous cameo brooch. An infant—who appears to be about six or seven months old—stares placidly at the camera and rests comfortably on the sitter’s lap, enfolded in her arms. The child wears a long white dress, which, at this period, was standard daily wear for infants until they became more mobile at about nine months old. The strong facial resemblance between the two figures indicates that this is a family portrait, rather than a photograph of a nursemaid for a well-to-do family with her charge. The pair is probably a mother and her child (although they could be siblings). In any case, this companionable twosome appears to be at ease with each other. A painted backdrop depicts a curtained window overlooking a landscape and represents an attempt by the photographer to create a genteel studio setting that linked his customers to respectable society. 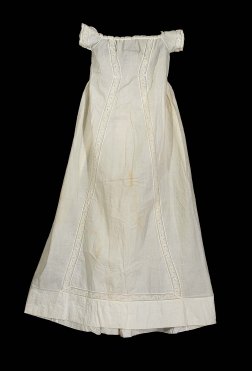 A second tintype in the exhibition likely portrays a domestic servant. Her dark calico dress with a gathered bodice is appropriate for household chores, and although she has ventured out to the photographer’s studio, she still wears her work apron. Did she have time off, or did she stop to have her photograph made while running errands during the work day? Writers of the period commented that servants often had a love of fashion, and, accordingly, the sitter wears a flower-trimmed straw hat in the latest style, a lace collar, and several pieces of jewelry. She is a confident woman who holds her head high, and she appears to feel like a million bucks attired in her finery. This proud working woman has large, capable hands and a no-nonsense expression on her open face with its hand-tinted rosy cheeks. The photographer’s tasseled velvet curtain imparts an air of elegance that belies the sitter’s humble station. 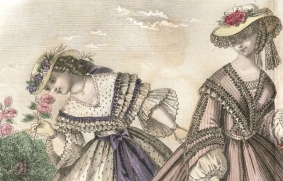 The same figure appeared a year later in Godey’s Lady’s Book, which helped to popularize French styles in the United States.

Detail from a fashion plate by Héloïse Leloir, La Mode Illustrée, 1862. This hat is similar to the one in the tintype on display at BPMM. 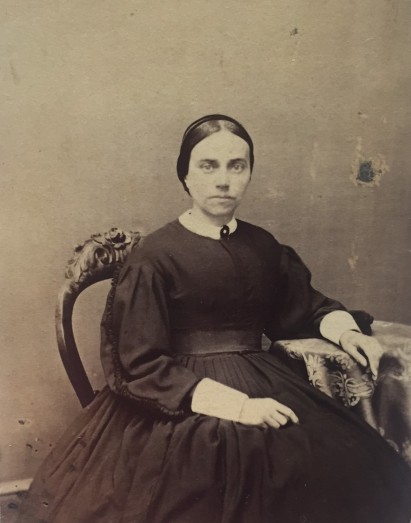 Our last portrait is a carte de visite from the Civil War period, when these small photographs, which were printed on paper and mounted on card stock, were especially popular. This image of an unknown young woman in mourning was taken in Philadelphia. At that time, women were advised to wear deep black exclusively during the first period of mourning, including black “crape” veils over their faces. After the initial phase, white collars and white cuffs or undersleeves were allowed, as can be seen here. The sitter wears a well-made dress (perhaps made of bombazine, a silk-and-wool fabric) and a collar that is held in place by a black mourning brooch, which was likely fashioned from jet or gutta-percha (a hard rubberlike substance). Her hair is held in what appears to be a black-banded net. A wedding band is faintly visible on her left hand. Although we do not know whom she is mourning—her husband or a brother killed in the war; a relative who died from disease, an accident, or old age; or even her child—the sadness in her face tells us that it was someone she cared about deeply, and there is a transcendent stillness in her pose that suggests the physical effects of grief. The balloon-back chair and brocade-covered side table are typical studio props.

This is only a minuscule sample of countless photographic portraits of forgotten (and unforgotten) faces that survive from the 19th century. These can be found in museums, private collections, family albums, flea markets, and online auctions. They teach us about everything from family history and social customs to clothing styles and photography practices. Even more, they radiate a sense of mystery that allows us to use our imagination to interpret these “faithful likenesses.”