Posted on November 16, 2017 by mansionmusings

The Bartow mansion today in autumn 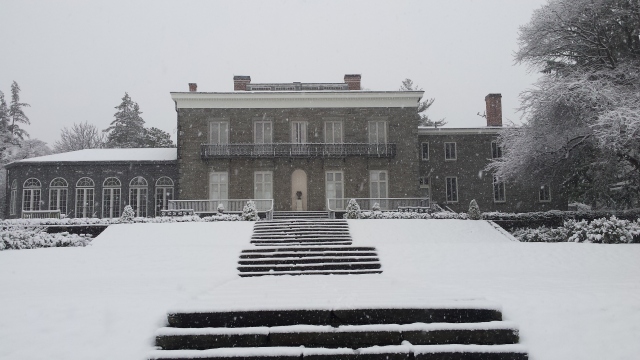 Thanksgiving on December 14? Yes, that’s right, if we’re talking about New York in 1843. At that time, individual states determined when—and if—an official recognition of the Thanksgiving holiday would occur. In fact, the New-York Daily Tribune reported on November 22, 1843, that only 14 states (out of 26) would observe public Thanksgiving, “three of them for the first time.” Formal celebrations ranged from November 3 (Georgia) to December 14 (New York). In 1863, President Lincoln proclaimed the “last Thursday of November” as a national day of “Thanksgiving and Praise,” at the urging of the magazine editor and writer Sarah Josepha Hale. 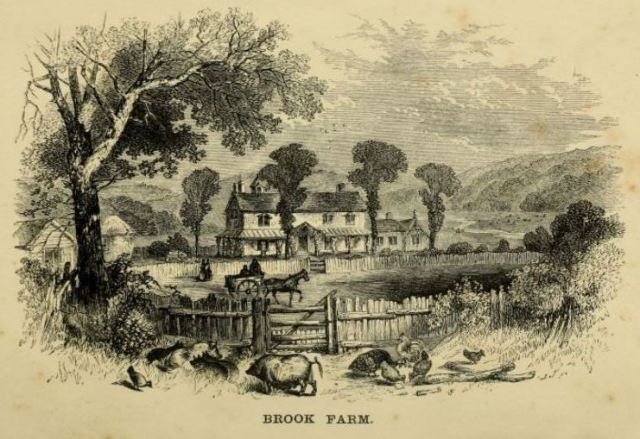 Frontispiece for Brook Farm by James Bolton, 1859. This memoir, in which the place names were changed, is about Pondfield Farm in Bronxville, where the Bartows’ neighbors, the Boltons, lived before moving to nearby Pelham.

Thanksgiving Day was a green spot in our anticipations; schools gave holidays; families gathered into narrower circles of love; city cousins arrived overnight to share our country pleasures. The very finest turkey—the peer amongst peers—was handed over to the cook. . . . Sisters lay out all their art on pumpkin pies; and new bonnets and neck-ties are to be seen hid in drawers, in a chrysalis state, ready and waiting for this grand Thanksgiving Day.

Robert and Maria Bartow must have been thrilled to finally move into their splendid Greek Revival mansion on Long Island Sound in 1842 after six years of construction. The family had moved from New York City to their country seat by at least 1838 and lived there year-round, according to the family’s tutor. During that time, they would have stayed in a now-demolished older house until their new residence was ready. On December 14, 1843, the lively household bustled with two teenagers and four children under the age of six, and the family would have celebrated their first or second Thanksgiving in the brand-new residence. Let’s imagine what the day was like.

St. Paul’s Church, Eastchester. Illustration from A History of the County of Westchester by Robert Bolton Jr., 1848

The Bartows and their older children, dressed in their Sunday best, would have ridden in one of the family’s carriages to Thanksgiving services at St. Paul’s Church in Eastchester (now Mount Vernon), where Mr. Bartow had recently served on the vestry and their neighbor Robert Bolton was the rector. (Bolton was concurrently serving at the newly consecrated Christ Church in Pelham.) According to Reverend Bolton’s son James, the colonial-era church “stood by itself on a green knoll at the entrance of the village. . . . Adjoining the church was a hundred-and-fifty-feet carriage shed, built . . . for the comfort and convenience of the worshippers. . . . We drove into this famous shed . . . and left the whole row [of horses]—two or three dozen—in charge of a single man.” Some New York journalists joked about parishioners dozing “away in the house of God” during the Thanksgiving Day sermon, but the devout Bartows probably enjoyed participating in worship and exchanging holiday greetings with their neighbors.

When the service was over, the family coachman would drive them home, where the other servants were busy preparing the holiday table. Because it was mid-December, the Bartows would have observed a wintry landscape as they looked out the carriage windows on the chilly three-mile ride back to the mansion. The following year, on December 11, 1844, the first snowstorm of the season fell on Thanksgiving eve. The next day, the New-York Daily Tribune reported:

Last night, about 7 o’clock, an old-fashioned, first-rate, thorough-going snow-storm set in. . . . Thanksgiving is nothing without snow enough on the ground to look like sleighing, at least . . . and let us give thanks for having this essential concomitant in the Thanksgiving treat. A gingle [sic] of sleigh-bells is the best music we know of for a dinner on this merry-making day. 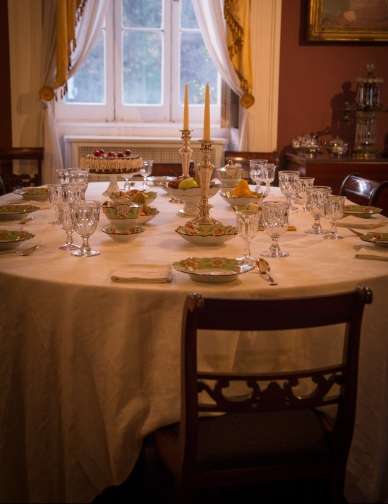 Dining room at Bartow-Pell. In the 19th century, however, the north parlor may have been used for large formal dinner parties.

“After church you assemble for dinner—such a dinner! Bless the cook—you can smell it from the farthest field,” enthused James Bolton. In addition to menu staples such as turkey and pumpkin pie, Bolton reminisced that “the farmers of West Chester country” slaughtered pigs in preparation for Thanksgiving, and “you would see them . . . hanging in rows on a rail.” After saying grace, Mr. Bartow would have been expected to carve the turkey. “Every person standing at the head of a family should be well informed upon the general principles of carving,” advised the author of The American Family Keepsake in 1849. Bolton recounted that “toasts are drunk [to] ‘The President, . . . Our Happy Country, and All absent kith and kin, in a bumper.’”

Dancing and games such as blindman’s buff were 19th-century Thanksgiving traditions, and, in the evening, the family would have enjoyed these activities in the double parlors. This was the perfect opportunity for Mr. and Mrs. Bartow to show off their impressive new house, and perhaps they invited friends and neighbors from nearby country estates to join in the fun. Oil lamps and wax candles illuminated the mansion’s high-ceilinged rooms; crystal prisms and mirror glass glittered in reflected light; and fireplaces with elegant marble mantels provided welcome warmth and cheer. According to tutor Augustus Moore, the Bartows lived in “first style” and had “servants and waiters in abundance.” They were “free, social and kind.” Clearly, a good time was guaranteed at their evening parties.

The Bartows now lived year-round in the new mansion but had they remained in Manhattan, they could have taken advantage of plenty of family entertainment on Thanksgiving Day. A circus, or “grand juvenile fete,” amused children at Niblo’s Garden (a well-known theater on Broadway), and P. T. Barnum’s American Museum offered “extra attractions,” along with performances by a gypsy family, a fortune teller, and five-year-old Tom Thumb on his first American tour.

And what about the servants? Obviously Thanksgiving Day involved extra work, and that has not changed for holiday personnel in the food-service industry. Hopefully, the staff was able to feast on some special dishes below stairs at some point during the busy day. Furthermore, most of the Bartow servants were recent immigrants, and participating in the tradition of Thanksgiving would have been an important cultural experience for these new Americans.

If Mr. or Mrs. Bartow had settled into a comfortable chair with the New York Herald on December 15, 1843, they might have read this rather cynical but clear-eyed account of the previous day:

Yesterday was celebrated with the accustomed variety of taste, feeling, spirit, and propriety. The Saints went to church—dozed—dreamed of stocks and the turkey in danger of being over-roasted at home; then, in the evening, had their little parties, cracked their nuts and their jokes and sipped their wine. . . silks and satins rustled . . . brilliant chandeliers burned brightly in the evening in splendid mansions—the poor shivered in the lanes and alleys . . . wealth reveled—poverty gnashed its teeth . . . and the great stream of human happiness and suffering flowed on as it has, and ever will, to the end of time.

James Bolton had an unreservedly bright and sunny view of Thanksgiving Day: “So loth were we to let the day go, that we used to hang on to its last shred, and even allow it to drag us over the boundary-line into to-morrow morning! Thanksgiving days are good for body, soul, and spirit.” And, in 1843, the Bartows would surely have agreed.

Over the river, and through the wood,

To Grandfather’s house we go;

The horse knows the way to carry the sleigh

Through the white and drifted snow.

For more on Thanksgiving in the 19th century, see Chicken Pie and Blindman’s Buff: What You Might Not Know about an Old-Fashioned Thanksgiving and James Bolton’s Brook Farm: The Amusing and Memorable of American Country Life.

1 Response to A Bartow Thanksgiving, 1843