Posted on January 27, 2018 by mansionmusings

The dilapidated Bartow mansion in the early 20th century

A host of grand 19th-century country houses once stood in what is today Pelham Bay Park. Why is the Bartow mansion the only one that remains? This is the story of how a historic gem was rescued by a group of horticultural enthusiasts, preservationists, Social Register grandees, and public officials during the years before the First World War and beyond.

The Bartow family and other estate owners sold their properties to New York City for parkland in 1888, and many of the buildings in the new Pelham Bay Park were subsequently rented to tenants. Around 1894, the socially prominent Turnbull siblings leased the Bartow mansion from the city for $40 a month and hired a retinue of servants to run the place. But the buildings in the park were hard to maintain. When a special legislative committee questioned Bronx Parks Commissioner August Moebus in the late 1890s, he testified: “There is not a house there [in Pelham Bay Park] that is in good condition. . . . it is only a blessing to find somebody that will occupy them to save the expense to the city from putting [in] a caretaker.” The fateful shadow of demolition loomed: “Q. If these are old ramshackle buildings that you would not live in if they were a gift, and each of them occupy several acres of ground of the park, why do you not tear them down and give the people the ground? A. That is just what I intend to do, and I am about to do it now.” However, the commissioner quickly regained his composure and corrected himself, adding that the houses were “too good” to be left unoccupied and at risk of being “burned down” if left unattended. Besides, he had not heard any complaints from people who had been “prevented from going into any portion of the park.” Hmm. Was Commissioner Moebus really a sympathetic preservationist? 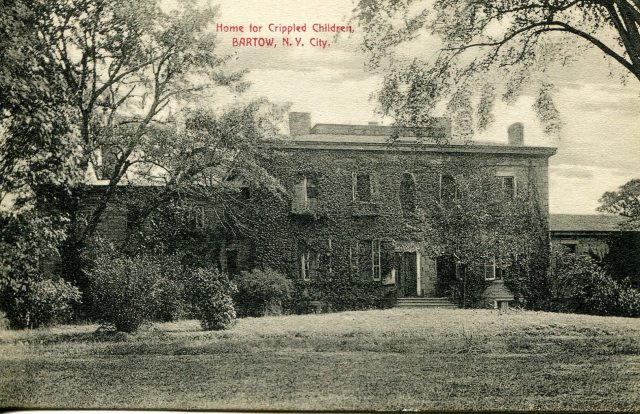 The Turnbulls gave up their lease by the summer of 1904, and, on June 1 of that year, the Parks Department gave permission to the Manhattan-based Day Home for Crippled Children to use the Bartow mansion and grounds as a summer campus for about 40 students with disabilities. The recently established institution—located at Madison and 133rd Street—served “children who are physically unfit to attend the public schools.”

During the summer the children are all taken to Bartow and spend their vacation in a spacious old house, surrounded by fields, on the Sound. Desks are discarded and lessons given out of doors for two hours each day. Nature study and light manual work take the place of the regular school routine, the boys doing weaving, basketry, and chair caning, while the girls embroider. The good food, medical care, and happy outdoor life work a rapid improvement in the health of these frail children. “A School for Crippled Children,” New York Times, March 1, 1908 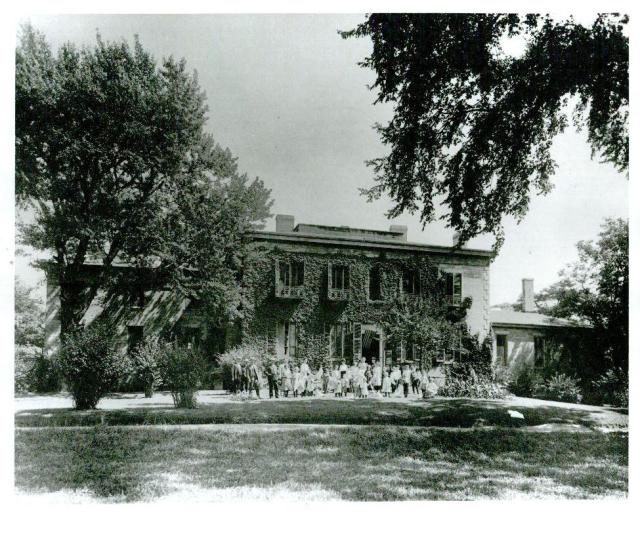 The Day Home for Crippled Children used the old Bartow mansion for its summer program from 1904 to 1914.

It was an age of burgeoning social responsibility. Philanthropic Manhattanites joined in the zeitgeist and organized fundraisers for the Bartow program. In addition, the mansion hosted several blind children from the International Sunshine Society during the summer of 1904. Other former estates in Pelham Bay Park also welcomed underprivileged children. The Hunter mansion, for example, was the summer home of the Little Mothers’ Aid Association, which provided excursions for tenement girls who labored long hours in the family home as “housekeeper, nurse, and family drudge” while their mothers earned meager livings in low-paying jobs (Social Service, July 1903). In 1912, the “Bartow Summer Home for Crippled Children” was still renting the “old Turnbull mansion” from the city, but an SOS appeared in the New York Times: “Funds are urgently solicited, in view of repairs to the home and providing instructors for vacational work for the beneficiaries, who are of all races, colors and religions.” Time was running out for the old house. Would it survive? 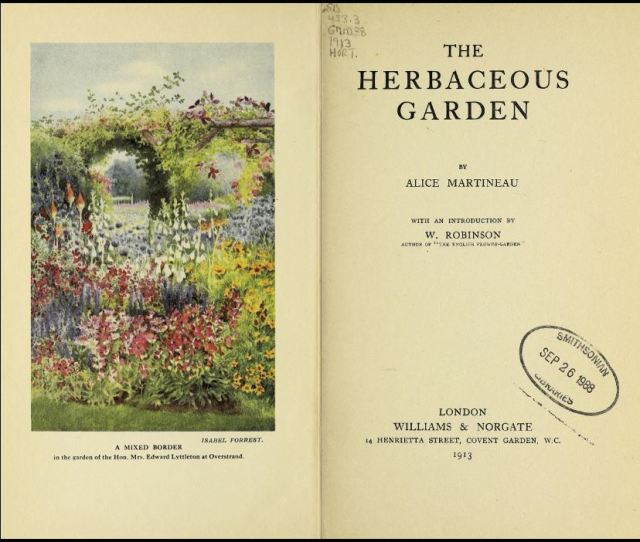 Frontispiece and title page from The Herbaceous Garden (1913) by Alice Martineau. The well-known horticulturist and garden writer William Robinson wrote the introduction.

The Bartow mansion was skating on thin ice, but an upper-crust English garden writer and friend of the British royal family was about to change everything. Her name was Alice (Mrs. Philip) Martineau, and, in September 1913, she set sail for America to work on a gardening commission, promote her recent book The Herbaceous Garden, and give a series of drawing-room lectures to fashionable society. Most importantly for Bartow-Pell, Mrs. Martineau’s ideas—which she shared with the well-connected Yankees she encountered during her trip to the States—prompted the formation of the International Garden Club (IGC), led by the socialite and Anglophile Zelia (Mrs. Charles Frederick) Hoffman, who was president of the Newport Garden Club and likely attended one of Martineau’s talks on gardening. The two ladies probably mingled socially as well. The following spring, in 1914, the new club, which was modeled on the Royal Horticultural Society, announced that it would lease the old Bartow estate in Pelham Bay Park to establish a garden “that would be for the joy and the instruction of all the people of New York,” according to a May 1914 article in the New York Tribune.” Martineau supported this mission, declaring that: “Gardening is something everybody can have a taste of. It isn’t only for the exclusive few.” The IGC chose the Bartow property because it was “the most historical of all these properties in Westchester. It still has the old Pell graves and the remains of the Oak under which according to tradition John [sic] Pell purchased this part of New York from the Indians.” (Journal of the International Garden Club, August 1917)

Despite the IGC’s democratic view, gardening had become a trendy pastime for wealthy women, and garden clubs were proliferating in “summer colonies such as Southampton, Stockbridge, Lenox and Newport,” according to the Tribune article.

With May in the air, women are turning from the tango to gardening. Women who own gardens are absent from the city directing their gardeners, and the more energetic are themselves digging and planting, clad in knickerbockers and rough jackets, or in smocked frocks. . . . The unusual interest in gardening this year among wealthy women of New York is due to the enthusiasm of the members of the new International Garden Club. Their optimism is irresistible.

The governor of New York, Charles S. Whitman, was among the dignitaries who attended the opening day of the International Garden Club on May 1, 1915. The ceremonies included a replanting of the historic Treaty Oak.

Although gardening clubs were often women’s organizations, both men and women originally belonged to the new IGC, including a number of bold-face names. Dr. Nicholas Murray Butler, president of Columbia University, was honorary president, and members included Mr. and Mrs. Vincent Astor, Henry F. Dupont, Mrs. Henry Clay Frick, Mr. and Mrs. Archer M. Huntington, Mr. and Mrs. Cornelius Vanderbilt, and the Duchess of Newcastle. In its lease agreement with the city, the club agreed to restore and maintain the house and grounds, establish experimental gardens, offer monthly lectures and exhibits, form a library, establish a certificate program for gardeners, provide free instruction to teachers for public-school gardens, and assist other horticultural societies and garden clubs. Members could rent rooms, dine, and attend special receptions. The board soon hired the white-shoe architectural firm of Delano & Aldrich to oversee the restoration of the house and to design a walled sunken garden. In the new age of the automobile, the beautifully renovated property even became “a mecca of motorists,” the New York Sun reported in May 1915.

The International Garden Club published an ambitious horticultural journal from 1917 to 1919. The first volume included photographs of the newly refurbished mansion and gardens.

In 1918, the bellicose new Bronx Parks Commissioner Joseph Hennessy tried to oust the IGC from the park, claiming that the club was “an exclusive institution on thirty acres of public park property” and that its role as an “educational institution” was “only a pretense,” but the New York Supreme Court ruled in favor of the IGC. After World War II, period rooms were installed and the mansion opened its doors as a historic house museum. 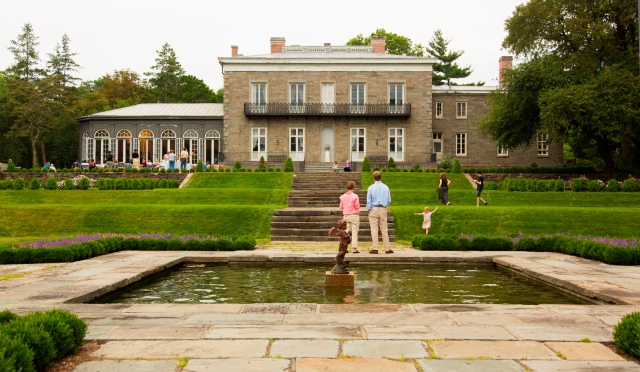 Today, the Bartow-Pell Conservancy continues to preserve the house and gardens and provide dynamic educational and public programs. This sleeping beauty is wide awake!