Posted on February 8, 2018 by mansionmusings

Reproduction undersleeves based on ca. 1855 designs

Wearing a new dress is fun—and accessories are part of the excitement. Who doesn’t want to create the perfect look? That hasn’t changed over time, and it is as true for historical interpreters as it is for trendy fashionistas. Besides, accessories can make all the difference in getting historic costuming just right.

In the 1850s, stylish new dresses often had “pagoda sleeves.” These shortened sleeves had wide, flared bottom openings and were almost always worn with undersleeves (also known as “engageantes”) to modestly cover bare arms, protect from the sun, and add a bit of embellishment. The undersleeves were usually paired with a matching collar or a chemisette, a sleeveless underbodice worn to fill in the area above the neckline of the dress. Undersleeves have been worn during various periods of fashion history. But what did they look like in the 1850s? This is the question I asked myself after making a reproduction dress with pagoda sleeves. The undersleeves would be my next sewing project.

Theodore E. Pine (1827–1905). Mr. and Mrs. Daniel T. MacFarlan, 1858. Oil on canvas. The Metropolitan Museum of Art, Gift of Mr. and Mrs. Louis D. Gregg, 1950. In this portrait on long-term loan to Bartow-Pell, Mrs. MacFarlan wears pagoda sleeves and lace undersleeves with a matching collar. Her husband engaged in various lines of business, and, in the mid-1850s, he was an auctioneer. In May 1855, he presided over a sale of large quantities of textiles that included “undersleeves, collars, bands, chemisettes, in sets,” according to the New York Herald.

I started my research with the collections database of the Metropolitan Museum of Art’s Costume Institute, where I found many examples of undersleeves from the right period. Next, I turned to fashion plates and articles from women’s magazines published in the 1850s, such as Godey’s, Peterson’s, and Graham’s. I also took a look at some paintings from the period, including the 1858 portrait of Mr. and Mrs. Daniel T. MacFarlan by Theodore Pine (1827–1905), which is on long-term loan to Bartow-Pell from the Met. Finally, my research took me to photography and the numerous ambrotypes and daguerreotypes from this period, such as the splendid images in Joan Severa’s indispensable books My Likeness Taken: Daguerreian Portraits in America and Dressed for the Photographer: Ordinary Americans & Fashion, 1840–1900, which also include the author’s superb scholarly text.

Undersleeve styles in the 1850s were variations on a couple of general designs. One mimicked the bottom line of the pagoda sleeve and was open and flared at the wrist. These styles often used gathers sewn into an embroidered or lace insertion to create a deep, flounced edge. Another design gathered the undersleeve’s fullness (or “puff”) into a cuff at the wrist. Some engageante styles even featured two or more puffs. “There is no absolute fashion for sleeves,” Godey’s declared in August 1855. “Nearly every one follows her own fancy, though puffs, or wide frills from the elbow are considered the style. Undersleeves are also puffed, the fall of lace or embroidery that finishes them about the wrist coming from a loose band of insertion, à la duchess [sic], below the puffs.” Engageantes at this time were typically held in place by elasticized bands above the elbow. In May 1851, for example, Godey’s advised its readers that “a small gum-elastic bracelet . . . will be found the neatest support for a demi-sleeve.” According to Joan Severa, undersleeves were sometimes tacked down with a needle and thread.

Women had a choice of fabrics and trims. Period sources describe undersleeves made of lightweight or sheer textiles such as fine muslin, batiste, cambric, grenadine, tulle, and netting. Valenciennes, Alençon, and Venetian (guipure) lace were used both for the body of the sleeves and as trim. Engageantes were typically white, but black was worn for mourning, and Peterson’s Magazine advised in December 1850 that for winter warmth, they could match the fabric of the dress. Aunt Ruth, a character in “Cousin Clarissa,” an 1853 short story, had “no time to spare for her dress. . . . She just looks sidewise at white spencers and under-sleeves and collars, and puts them from her. She can never be seeing to them, starching them and making them white. So she puts on under-handkerchief and under-sleeves of black silk lace.” In May 1851, on the other hand, Godey’s stated: “In-doors, no undersleeves are needed for summer, particularly for young ladies, but for a street costume, there is every variety of undersleeves.” 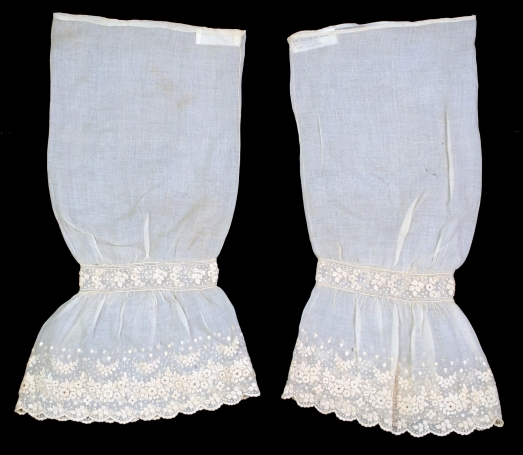 In addition to various types of lace, whitework embroidery—including broderie anglaise (also known as eyelet lace)—was extremely popular on flounces, borders, and insertions. And Vandyke points, so-called because they resemble the V-shaped scalloped collar edges found in 17th-century portraits by Anthony Van Dyke, were commonly used in embroidered and lace borders in the 1850s. Ribbons and velvet were sometimes used as trim.

Undersleeves were often made at home from patterns published in Godey’s and other women’s magazines. In 1857, a short story in Peterson’s Magazine describes a young lady who spent so many hours “embroidering undersleeves, etc.,” while her fiancé bent “over his study-table” that the couple grew apart. Undersleeves were also offered for sale in shops, along with collars and chemisettes. The New York Herald reported in November 1853 that “American ladies appear to value a dress only in proportion to its cost,” and the most expensive undersleeves and collars could cost up to $30. No wonder women often made them at home. Now it was my turn. 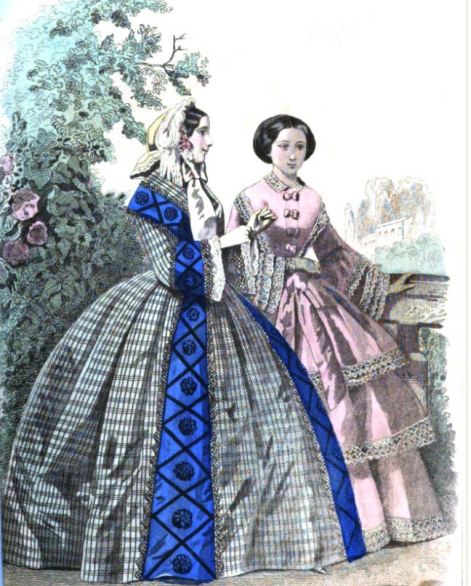 The ladies in this fashion plate wear pagoda sleeves with white undersleeves. Peterson’s Magazine, May 1857

I decided to make my undersleeves out of muslin with an insertion of whitework embroidery and a deep whitework flounce. I scoured eBay for just the right vintage or antique embroidered textile fragments. After I had those in hand, I bought the right shade of white muslin to match, which I would use for the top part of the undersleeves. My modern muslin was not as fine as many of the semi-sheer period versions, but it was more practical (and would be covered by the dress sleeve, anyway). Meanwhile, I bought a pattern from a company that specializes in historic clothing. But I needed to adapt the pattern’s simple design since it wasn’t exactly what I had in mind, so I started by sewing a plain muslin mock-up. After that, I was ready to assemble all the pieces and make the finished product. Thanks to the Vandyke points on the whitework flounce, I did not need to stitch a hem. The last thing I had to do was make a casing at the top and thread in some elastic. My undersleeves were finally ready. I still need to make a matching chemisette, but in the meantime, I have an eBay find that will do. I’m almost ready for the runway or maybe even a spread in Godey’s.