Portrait of a Patron: Isaac Bell and Saint-Mémin

Isaac Bell (1768–1860) and his wife, Mary Ellis Bell (1791–1871), of New York City commissioned the bedstead from Charles-Honoré Lannuier (1779–1819) upon their marriage in 1810, and the cabinetmaker completed it between 1812 and 1819. Lannuier was trained in Paris and arrived in New York City in 1803 knowing how to make furniture in the newest and most fashionable Classical style. He died prematurely in 1819, but in his brief career he became the finest cabinetmaker in the United States, making pieces of incredible refinement, sophistication, and beauty, which survive today in museum collections. He was patronized by the wealthiest strata of American society, who were eager to be in step with international style. 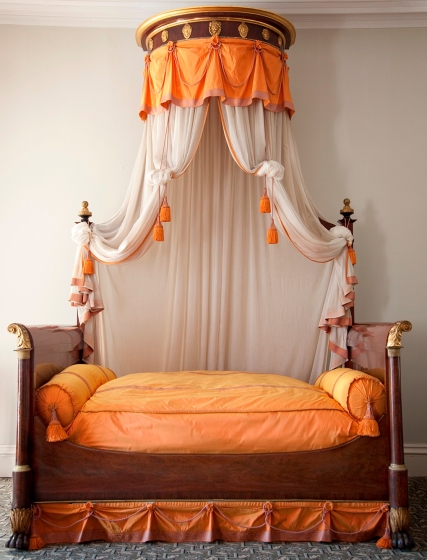 A portrait of Isaac Bell by another French émigré, Charles Balthazar Julien Févret de Saint-Mémin (1770–1852), is now on display at Bartow-Pell, thanks to a recent loan from a descendant.

Isaac Bell was born in Stamford, Connecticut, in 1768, the son of a prosperous merchant. As Loyalists, the Bell family moved to New York City and thence to New Brunswick, Canada, during the American Revolution, but Isaac Bell returned to New York in 1792 and made a handsome sum by sailing as supercargo—the officer who managed and sold the ship’s cargo—on three voyages to China beginning in 1798. In 1810, when Isaac Bell and Mary Ellis Bell married, the much-younger bride was a youthful 19 years old and the middle-aged groom was a wealthy merchant. His successful shipping company filled the coffers of the couple’s bank account and allowed them to indulge in top-quality luxury goods for their home at 14 Greenwich Street in the “newest fashion” (or, as a French-English dictionary translated the phrase in 1800, “dans le goût le plus moderne”). Neoclassicism was the choice of modern, cultured people in the early 19th century. The Bells were enthusiastic patrons of the new style, and the couple’s timing could not have been better for commissioning articles of sophisticated beauty in the classical taste by the best artists and craftsmen. Their stylish home featured a set of chairs by Duncan Phyfe, Lannuier’s bedstead as well as a pair of card tables by him, and a portrait of Mrs. Bell by John Vanderlyn (1775–1852). And, of course, there was the 1797 portrait of Isaac Bell by Saint-Mémin. According to Lisa Sturm-Lind in her book Actors of Globalization: New York Merchants in Global Trade, 1784–1812, “Bell was rich and popular and socialized with New York City’s best circles. He was an intimate friend of Alexander Hamilton who frequently dined at his home.” Today, Bell’s papers are housed in the Archival Collections of the Columbia University Libraries. 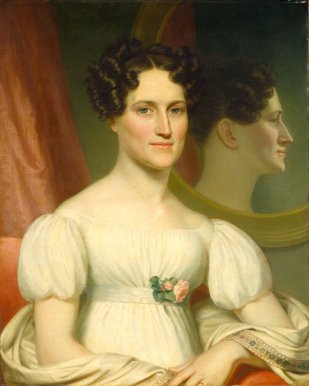 L’Amérique ou la guillotine? During the upheavals of the French Revolution, it’s no wonder that Saint-Mémin, a member of the nobility, chose to go into exile. He eventually joined other French émigrés in New York City, where there was a booming market for luxury goods and a wealthy merchant class with a passion for everything French. The savvy jeune homme with a talent for drawing and a penchant for technology quickly turned to engravings and physiognotrace profile portraiture to earn a living in the New World. The physiognotrace, a mechanical device that allowed artists to trace a sitter’s profile, was invented in late 18th-century France by Gilles-Louis Chrétien (1754–1811), a cellist at the court of Versailles.

Saint-Mémin had been born in Dijon to a wealthy Burgundian family of art collectors and bibliophiles. As a teenager, he joined the Gardes-Françaises, a select regiment that served as palace guards for Louis XVI under the ancien régime but disbanded after the fall of the Bastille in 1789, and the family fled to Switzerland a year later upon the abolition of the nobility. In October 1793, Saint-Mémin, his father, and their valet arrived in New York City, and within the next few years, the fledgling artist began his career as an engraver and portraitist. Ellen G. Miles, the author of Saint-Mémin and the Neoclassical Profile Portrait in America, suggests that he may have received some training at the art school in Dijon founded by the French painter François Devosge. It is also possible that he took art lessons at the École Royale Militaire in Paris, where he could have acquired drafting skills for making maps and precise topographical drawings. In addition, Saint-Mémin taught himself the art of engraving from an encyclopedia (almost certainly Diderot and d’Alembert’s Encyclopédie). 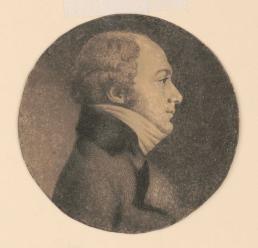 Saint-Mémin’s first works were engravings of town plans, but in 1796 he began a year-long partnership in New York with fellow French émigré Thomas Bluget de Valdenuit (1763–1846), who had sat for Chrétien, the inventor of the physiognotrace, and his partner Edme Quenedey (1756–1830) in Paris. In New York, Saint-Mémin and Valdenuit offered profile portraits made with the “celebrated Physiognotrace of Paris, and in a style never introduced before in this country,” which they promoted in the January 1797 New York Daily Advertiser and in other newspapers. Their shrewd marketing targeted well-to-do clients swept up in the Francophile craze of the new American republic and attracted the public’s attention with the novelty of new technology. A sitter could buy a set that comprised the original portrait, the engraved plate, and 12 engravings. The drawings were often housed in gilt-wood frames with reverse-painted black verre eglomisé (glass) mats ornamented with gold leaf.

Christopher Scheiner (1575–1650). Engraving of a pantograph in Pantographice, seu ars delineandi, Rome, 1631. Scheiner was the inventor of this mechanical device, which could copy and re-size an image.

According to Miles, “In the partnership, Valdenuit made the drawings and Saint-Mémin the engravings.” Using the physiognotrace, the artist began by outlining the sitter’s profile in graphite on paper that had been coated with a pink wash made of water, white chalk, and a little red pigment to produce a smooth surface. Then he completed the drawing by hand in black chalk or charcoal with white chalk highlights. The engraver reduced and copied the finely detailed, large-scale original to a copperplate using another machine called a pantograph. Sitters loved the results, which produced accurate likenesses before the age of photography. Saint-Mémin and Valdenuit initiated what would become a highly popular trend, and demand for profiles began to rise. Soon other artists in America started using similar devices, including Charles Willson Peale, who made silhouette portraits at his museum in Philadelphia with a machine that combined a physiognotrace and a pantograph. After Valdenuit returned to France in September 1797, Saint-Mémin continued the business in New York on his own. The drawing of Isaac Bell on loan to Bartow-Pell was made in 1797, a year in which both Valdenuit and Saint-Mémin produced original chalk portraits. Bell’s likeness was made when he was in his late 30s, well before his marriage in 1810.

In 1798, Saint- Mémin moved with his parents and a sister to Burlington, New Jersey. He established his portrait business in nearby Philadelphia and enjoyed even greater success than in New York. However, competition increased as profile portraits grew in popularity, and in 1803 Saint-Mémin began working as an itinerant artist, traveling from his home in Burlington to pursue new clients in Baltimore, Washington D.C., Richmond, and Charleston. By 1810, he was back in New York, and his artistic career was winding down. Finally, suffering from eyestrain, he stopped engraving and limited himself to painting a smattering of now-lost portraits and landscapes. As a portraitist in Federal America, Saint-Mémin had produced more than 900 profiles from 1796 to 1810. His sitters included famous people such as George Washington and Thomas Jefferson, as well as French émigrés, Native Americans, military officers, and well-to-do Americans from fashionable society. After the fall of Napoleon and the restoration of the monarchy in 1814, Saint-Mémin returned to France and stopped working as an artist. In 1817, he became director of the museum in his native Dijon, a position he held until his death in 1852. 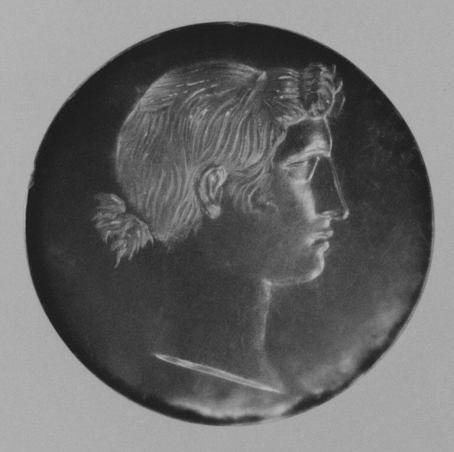 Intaglio portrait of a Woman. Roman, late 1st century B.C. Sard (a type of chalcedony). The Metropolitan Museum of Art, Purchase, Charles Butt Gift, 1997. The origins of profile portraiture can be traced to classical antiquity and objects like this intaglio.

Profile portraits were commonly used in antiquity on Greek vases and on Greek and Roman coins, medallions, cameos, and relief sculpture. Some of these objects later became popular as Grand Tour souvenirs that could be placed in a cabinet of curiosities. These ancient profiles also inspired portraits, engravings, commemorative medals, and other works during the Italian Renaissance and in 18th-century France. The influence of Swiss physiognomist Johann Kaspar Lavater (1741–1801) contributed to the mania for profile portraiture in the late 18th and early 19th centuries. Although the tenets of physiognomy—which argued that physical features were linked to character traits—had been introduced in antiquity, Lavater’s essays, first published in German in the 1770s and translated into French and English over the next decade, captured the public imagination and inspired a further passion for profile portraits and silhouette likenesses.

Although Saint-Mémin is well known for his role in introducing the physiognotrace to the United States, he was more than just a technician using a mechanical device. In 1921, art historian Theodore Bolton enthused: “Saint-Mémin’s portraits are of great beauty . . . [and] impress the present writer as do those of Holbein, Clouet and Ingres. This statement is not minimized by the fact that the profile was placed with a machine. Only the mere outline could be obtained in this manner and Saint-Mémin’s power is shown in the assurance of his line and the perfection of his drawing.”

Objects that once belonged to Isaac and Mary Ellis Bell, including those at Bartow-Pell, are fine examples of how a patron of the arts embraced the “newest fashion.” Now, two of these pieces have been reunited.

3 Responses to Portrait of a Patron: Isaac Bell and Saint-Mémin