Fresh Farm Milk from a Historic Estate: How a New York City Garden Club Helped the War Effort in 1918 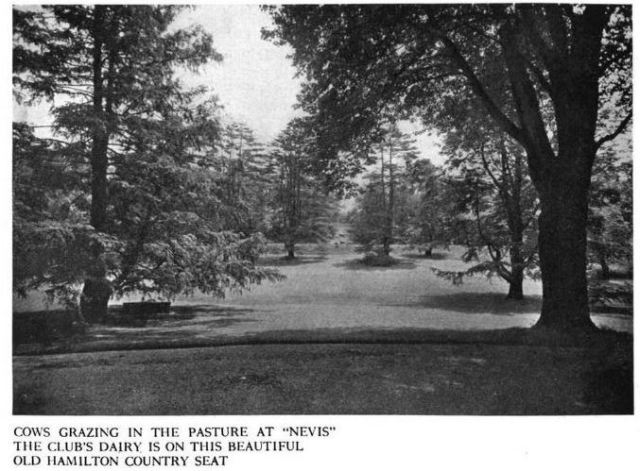 It was time to step up. One hundred years ago, America had entered the First World War, and patriotic civilians were eager to contribute on the home front to help defeat the Germans. Meanwhile, milk prices in New York City had skyrocketed, and the local dairy industry was accused of price fixing. The most vulnerable victims of this controversial price hike were poverty-stricken families living in Manhattan tenements. Thankfully, a group of philanthropic horticultural enthusiasts joined with the New York City government, a well-known dairy expert, and a historic country estate to do their part in the war effort by providing fresh milk to needy mothers and children. 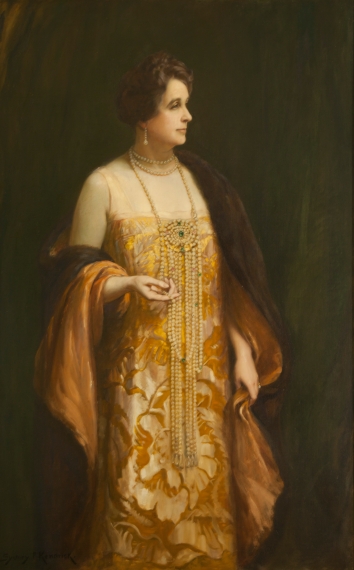 Sydney Percy Kendrick (British, 1874–1955). Mrs. Charles Frederick Hoffman, ca. 1930. Oil on canvas. Bartow-Pell Mansion Museum, Gift of Mrs. Aymar Johnson, 1978.02. This posthumous portrait was painted from a photograph taken of Zelia in evening dress before a 1920s function in London and was given to Bartow-Pell by her daughter.

A few years after the International Garden Club (IGC) had established its Bronx headquarters at the newly restored Bartow mansion in bucolic Pelham Bay Park, the United States was at war. Subsequently—inspired by the British Red Cross using country houses as hospitals—the group decided in March 1918 “to offer its club house and grounds for an open air and convalescent hospital for our returning wounded, to be run in cooperation with the Red Cross Society, the Fordham Hospital and the New Hospital built by Columbia University which has been taken over by the Federal Government,” the club’s Journal reported. The charge was led by IGC president Zelia Hoffman (1867–1929), but soon she received a letter politely informing her that the army medical corps had declined the club’s proposal. “My dear Mrs. Hoffman,” wrote Lt. Col. C. H. Connor, “I sincerely regret that we cannot, at this time, give you a definite acceptance of your very generous and patriotic offer, but the Red Cross is not in a position to state as to just how much of this work, in the care of convalescents, will be delegated to them. The present attitude of the War Department is that they expect to treat most of the wounded in France. . . . Those who can never go back as soldiers will be returned to the United States where they will be treated in military hospitals.”

But the IGC was determined to make a difference. So they teamed up with the Mayor’s Committee of Women on National Defense on another urgent wartime cause—providing milk to poor families in New York City. Mrs. Hoffman—who held leadership positions in both organizations—sent a letter to prospective supporters asking for donations:

The most serious question of the moment is the need of cheap milk in the crowded tenement district on the East Side. . . . The price of milk has become prohibitive owing to War conditions, and as a War Measure, the Mayor’s Committee of Women on National Defense for the Bronx is arranging to pasture several hundred cows on the available meadow-land through the Bronx. Motor trucks will carry the milk daily to stations on the Upper East Side, where it can be sold at a reasonable rate to these people of the crowded tenement section. The saving of our infant population and the maintaining in health of our little children is as necessary a War measure as the care of our wounded, and for this purpose a supply of good, cheap milk is an absolute necessity. Several motor trucks will be needed at $900.00 each to carry the milk every day to the stations, and gifts of these and contributions are asked towards the purchase of cows and for the labor to maintain them during the duration of the War. 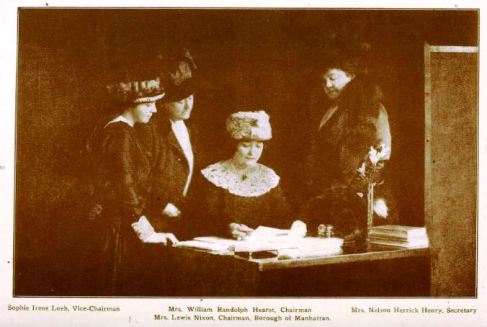 Officers of the Mayor’s Committee of Women on National Defense, New York, 1918

From the start, publicity was limited “to the bare statement of work accomplished,” Elisabeth Marbury, spokeswoman of the mayor’s committee explained. “To establish milk stations and to feed the babies struck us as more commendable than to portray dairy farms à la Marie Antoinette herding cows with gilded hoofs and be-ribboned horns.” 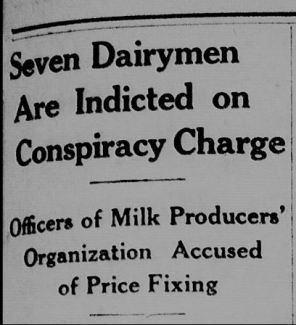 But there was more to the sky-high milk prices than the war. A seemingly endless stream of newspaper articles chronicled a price-fixing scandal that engulfed the New York dairy industry beginning in late 1917, and this led to investigations by the district attorney, who indicted dairymen on conspiracy charges for violating anti-trust laws. The New York Times quoted Mayor John F. Hylan in December 1918: “When we find men combining to extort blood money at the expense of little children, then it is time for public officials to persistently pursue these culprits to the end that the violators of the law pay the penalty, the price of milk be reduced and the lives of little children saved.”

Milk was universally recognized as essential to infant, child, and maternal health. In January 1918, the Times reported that former President Theodore Roosevelt “wanted to see the most radical action taken to secure an ample supply of milk to every child in the city.” And Alice Lakey (1857–1935), a prominent activist for “pure food” who had helped enact landmark consumer protection legislation, believed that the “use of dairy products” was a “war duty [so] that other foods may be conserved for the fighting forces,” the Times reported in a story on the National Milk and Dairy Farm Exposition in May 1918. “It is our desire to acquaint all women with the food value of milk,” she said. 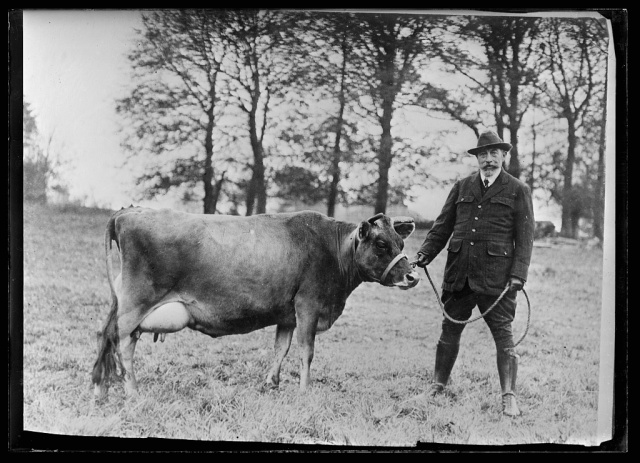 Dairy cow at the American Red Cross Hospital Farm, Salisbury, England, 1918. Captain Frank S. Peer of Ithaca, N.Y., director, is shown with a Jersey cow. This was the breed favored by Edward Burnett, the dairy expert who advised the IGC at Nevis. Library of Congress Prints and Photographs Division, LC-DIG-anrc-10205

Mrs. Hoffman and the IGC forged ahead with their plans for a dairy, and they worked quickly to find a suitable location. According to the IGC Journal of June 1918: 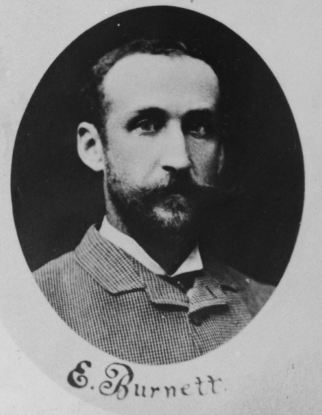 Mr. Edward Burnett, the eminent dairy expert, was invited to cooperate and inaugurate the work. Owing to the expense and lack of time it was found impracticable to construct cow stables at Bartow, and it was decided to lease a private place with an already established dairy. Mr. Burnett was directed to purchase the cows and has been able to obtain some very fine specimens. The War Committee of the Garden Club has been most fortunate in obtaining the beautiful old Hamilton place “Nevis” at Irvington on the Hudson, with an up-to-date dairy just built.

Edward Burnett (1849–1925), a Harvard graduate and former U.S. congressman from Massachusetts, was an agricultural and dairy expert who advised wealthy estate owners and worked alongside Frederick Law Olmsted (1822–1903) at Biltmore, George Vanderbilt’s massive estate in North Carolina. Shortly before America entered the war, Olmsted’s son Frederick Jr. (1870–1957) and the IGC had discussed creating a master garden plan for the grounds at Bartow, so perhaps it was through the Olmsted connection that Burnett joined the IGC dairy project. 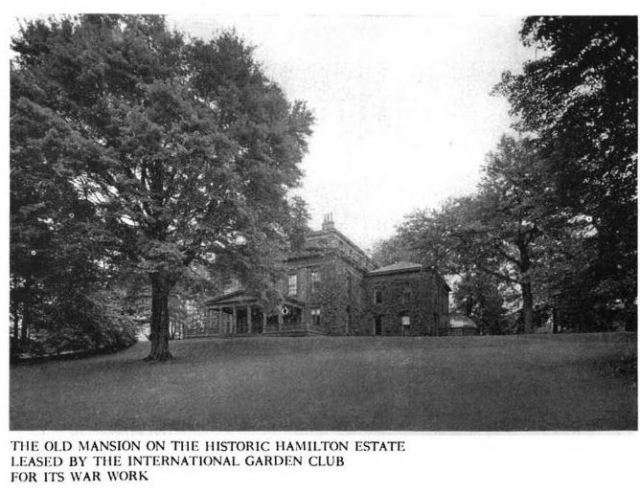 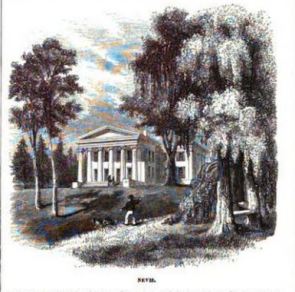 Although the IGC was unable to house a dairy at Bartow, they found the perfect solution at Nevis, the former estate of Alexander Hamilton’s son James (1788–1878) in the suburban village of Irvington. Nevis, which was named after the elder Hamilton’s birthplace, featured a large Greek Revival house built in 1835 and 68 acres of land overlooking the Hudson River. A modern dairy, ample pastureland, and close proximity to New York City were just what the IGC needed. Fortunately, they were able to lease the house, and in September 1918 Zelia Hoffman reported:

We started on May 1, 1918, and for three months—May, June and July—have sent between six and seven thousand quarts of the very best certified milk to New York, this being a daily average of about seventy-two quarts. The cost of production has been about two-thirds of what it would have cost to have bought the same amount of milk, and it would have been impossible to have obtained such milk as 98 per cent of all milk sold in New York now is pasteurized (that horrid condition of a wonderful natural product), and certified milk of the kind we have been producing can only be obtained in small quantities at a very high price. 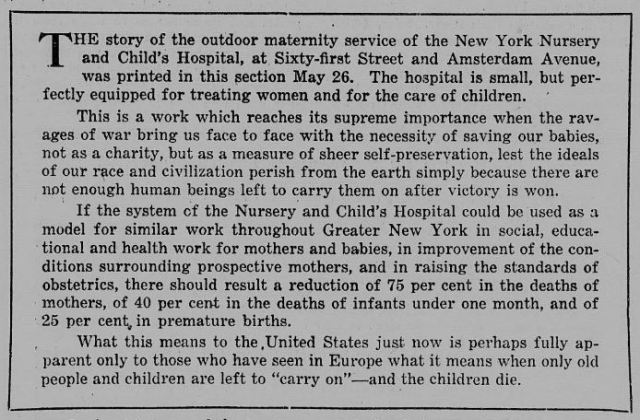 Sidebar from “Putting Baby’s Welfare on the City Map,” New York Tribune, June 16, 1918. The New York Nursery and Child’s Hospital was one of the recipients of milk from the IGC’s dairy in the summer of 1918.

Quart bottles were “sold [at cost] and given away to patients of the maternity center, Union Settlement, 237 East 104th Street.” In addition, “24 quarts a day have been sent to the Vanderbilt Clinic, department of Social Service.” A third beneficiary was the New York Nursery and Child’s Hospital, whose nursing superintendent Miss Rye Morley wrote: “My dear Mrs. Hoffman, I want very much, in behalf of our babies and mothers, to extend to you our very sincere appreciation for the generous supply of milk, which comes to us daily . . . I cannot tell you what this means.” 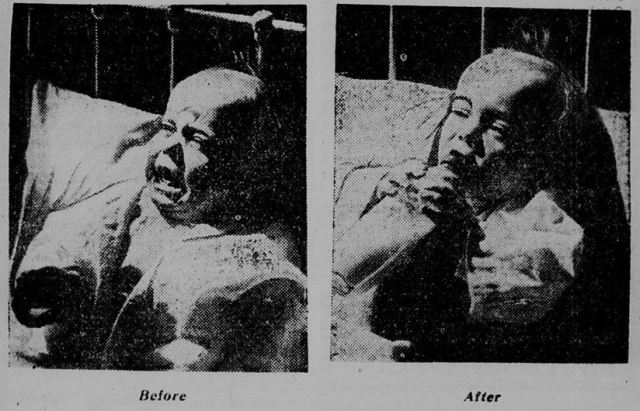 Women’s History Month is the perfect time to celebrate the work of the IGC Milk Committee under the leadership of Zelia Hoffman and their contribution to the health and well-being of women and children during the First World War.

2 Responses to Fresh Farm Milk from a Historic Estate: How a New York City Garden Club Helped the War Effort in 1918