Hats, Gloves, and Pearls: Fashion Promenade in the Garden, 1960 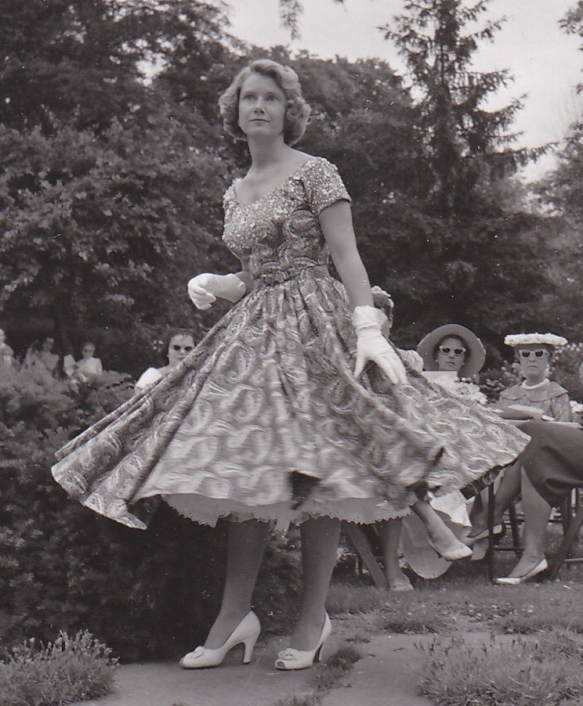 Runway twirls and a peek of frilly petticoats. Pearls. Women in hats and gloves. And a radiant bride in a tulle veil, of course.

On a gloriously sunny Wednesday in May 1960, smiling models—most of them wearing gloves, the era’s ubiquitous accessory—floated graciously across the terrace at Bartow-Pell. Their conservatively chic ensembles ranged from sundresses to evening gowns. 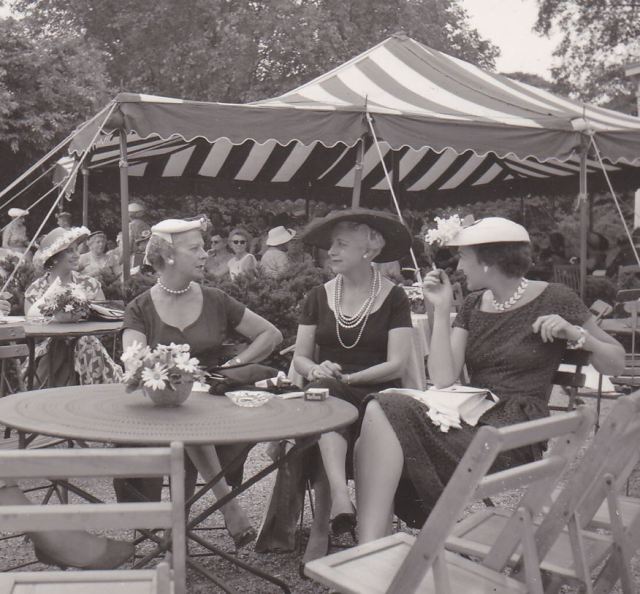 “Necklines on everything are plain and collarless, a frame for the throat and face,” wrote Carrie Donovan in “Fashion Trends Abroad, Paris: Review of Spring Collections” (New York Times, February 5, 1960). Many of the dresses worn at Bartow-Pell followed this Parisian trend.

The May Garden Party and Fashion Promenade was a fundraiser hosted by the International Garden Club (IGC) to “augment the maintenance funds of the estate, now the Bartow Mansion Museum,” the New York Times reported on May 15, 1960. The charity event commemorated the 45th anniversary of an “administrative effort in behalf of the Bartow Mansion and its formal gardens in Pelham Bay Park, the Bronx.” (The IGC had officially leased the mansion and grounds from the New York City Parks Department in May 1915.) For the sake of accuracy, it is worth mentioning that just the year before, in 1959, the IGC had changed the site’s name to Bartow-Pell Mansion and Gardens in order to acknowledge the Pell family’s strong historical connections to the property.

Luckily, the day was recorded with more than just a dry newspaper article. A series of contact sheets in the BPMM archives gives us a vivid view of the fashion parade and its well-dressed onlookers, providing a fun snapshot of styles and manners at the beginning of the “Mad Men” era. 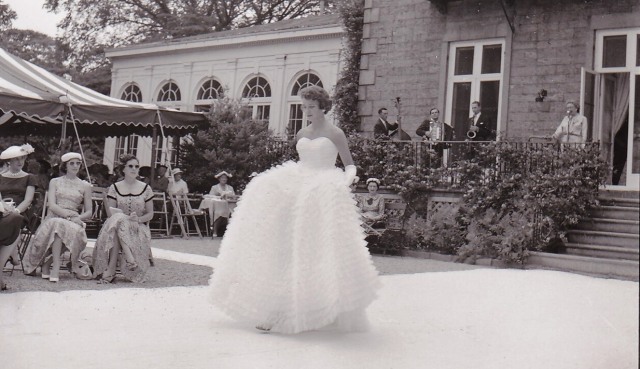 During the show, a musical trio played now-forgotten tunes on saxophone, bass, and accordion. A stylish woman—probably a club member—was the announcer. The models (including little girls) were most likely IGC members and their children. A bevy of svelte society ladies in sunglasses, some older grandes dames, and a few bemused men looked on. And there were lots of hats. De rigueur, naturally. 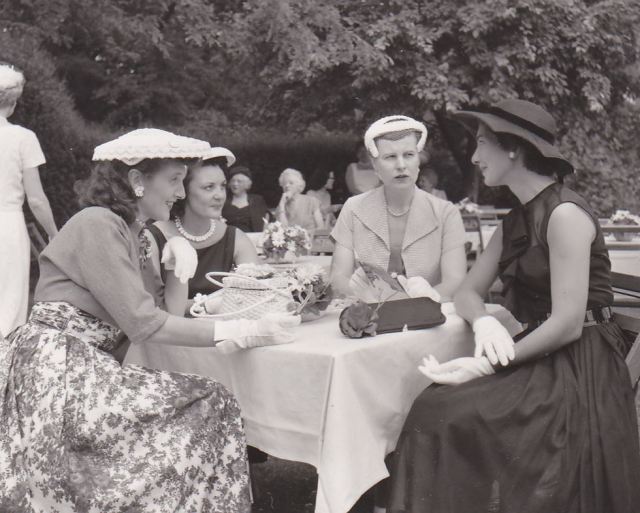 Charity fashion shows had been popular for decades. For example, on October 22, 1915, the New-York Tribune announced a “Bazar de Charité et Revue des Modes” at the Ritz Carlton Hotel for the “benefit of the French Wounded Emergency Fund” during World War I. And in February 1960, the March of Dimes staged its “sixteenth annual parade of styles” when “more than 1,200 persons crowded the ballroom of the Hotel Astor,” according to the Times. “A well-turned out group of women eschewed the floral spring hats usually worn at the luncheon in view of yesterday’s icy blasts. They appeared well bundled up in furs.” Anita Loos, the author of Gentleman Prefer Blondes, was one of the event’s script writers, and Salvador Dali designed some of the sets. “Fashions ran the gamut from lighthearted play clothes to elaborately designed evening clothes.” 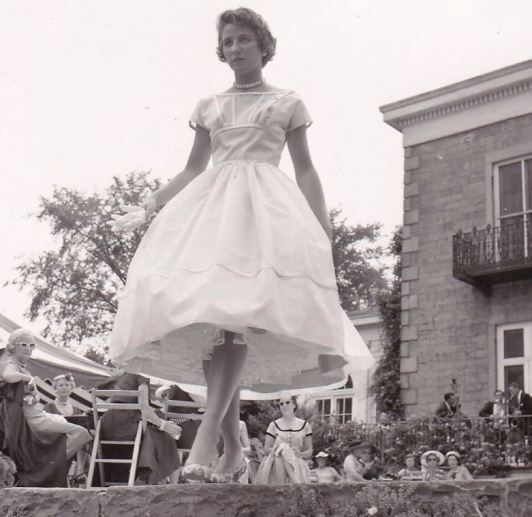 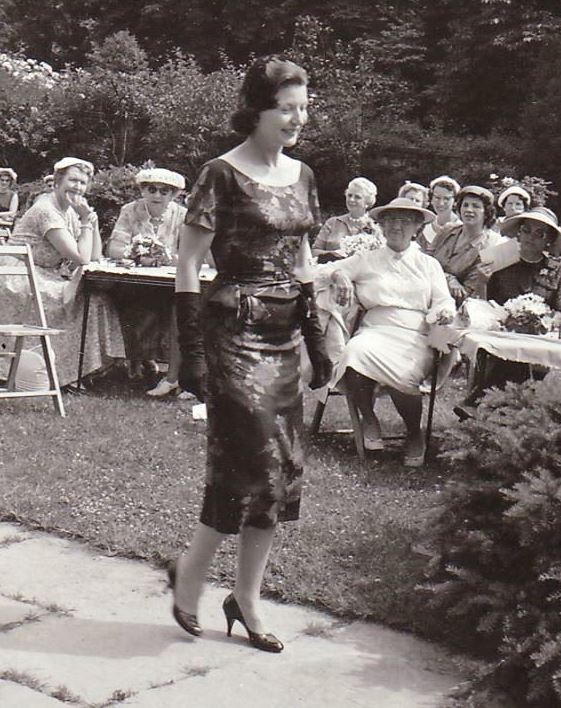 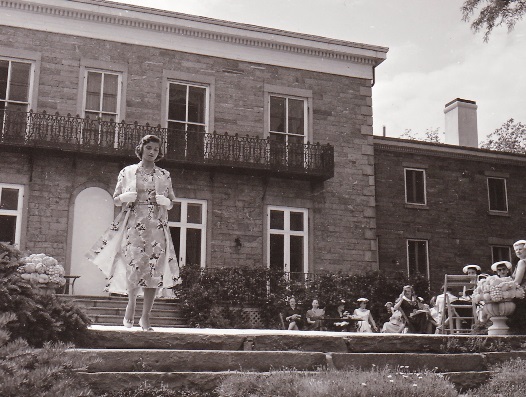 The legendary (and, at that time, young) fashion editor Carrie Donovan reported on the use of color in “Fashion Trends Abroad, Paris: Review of Spring Collections” (New York Times, February 5, 1960): “The brighter, more vivid, more beautiful the color, the better it is for spring. Plain old navy blue with a touch of white has no place in Paris where clothes are tinted Ming blue, turquoise, lacquer red, lavender, orange, apricot, coral, grass green or shocking pink.” Another Times reporter—whose story appeared on the very same day as Bartow-Pell’s event—described sales of summer styles: “Chiffon and organza dresses, particularly in more brilliant shades, were requested.” With just a little imagination, we can conjure up the multi-hued fabrics in Bartow-Pell’s Technicolor fashion promenade. Although perhaps not quite as colorful as cutting-edge Parisian fashions,  this was most certainly not a black-and-white affair, unlike our photographs. 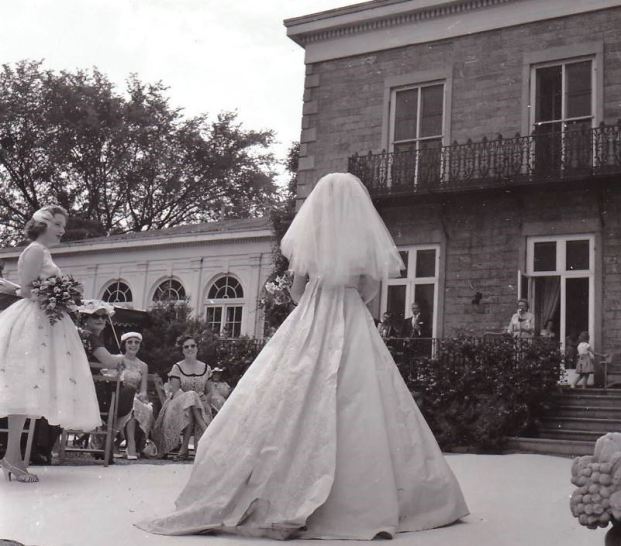 In 1960, the year of Bartow-Pell’s fashion show in the garden, Percy Faith and his orchestra topped the pop charts with “Theme from ‘A Summer Place,’” and “everybody” was doing the twist (or soon would be). Alfred Hitchcock’s controversial horror film Psycho terrified moviegoers, while Doris Day’s sunny personality lit up the screen in Please Don’t Eat the Daisies. Families sat in front of their black-and-white television sets watching the Donna Reed Show, Leave It to Beaver, and the Ed Sullivan Show. Dwight D. Eisenhower was in his final year as president, and the Camelot era dawned when John F. Kennedy beat Richard M. Nixon in an exciting race for the White House that November. 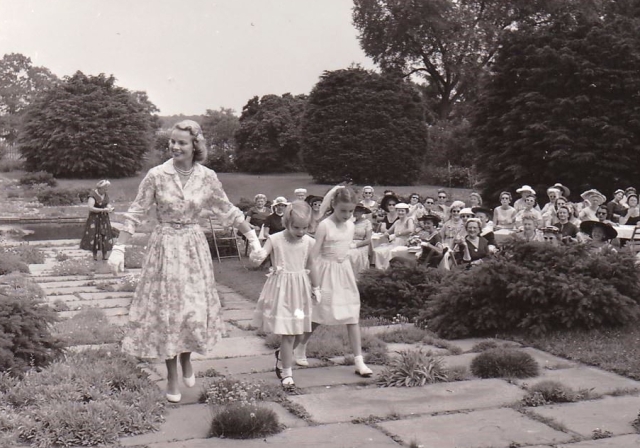 At one time, plants grew in the garden pavement and included sea thrift (armeria maritima), a small flowering plant. 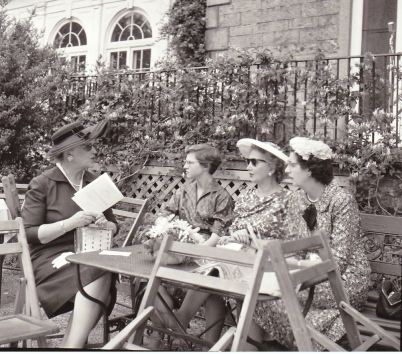 It was the start of a decade that would bring enormous social transformation, but the feminism of the “Swinging Sixties” was yet to come. Yes, some women earned a paycheck, but many were housewives who needed a wardrobe suitable for household duties and childrearing as well as for cocktail parties, entertaining, church services, and other dressy occasions. The times were about to change, however, so these ladies needed to hold onto their hats!