A Botanical Paradise: Transactions of the Horticultural Society of London

Posted on January 6, 2019 by mansionmusings

One summer day in 2009, while rummaging through some uncatalogued volumes in Bartow-Pell’s collection of antiquarian gardening books, we unearthed something unexpected—seven large editions of the lavishly illustrated publication Transactions of the Horticultural Society of London. The title is businesslike, but the Transactions teem with the latest horticultural discoveries, innovations, and research from the first half of the 19th century. Beautiful hand-colored plates are scattered like gems throughout the letterpress pages. 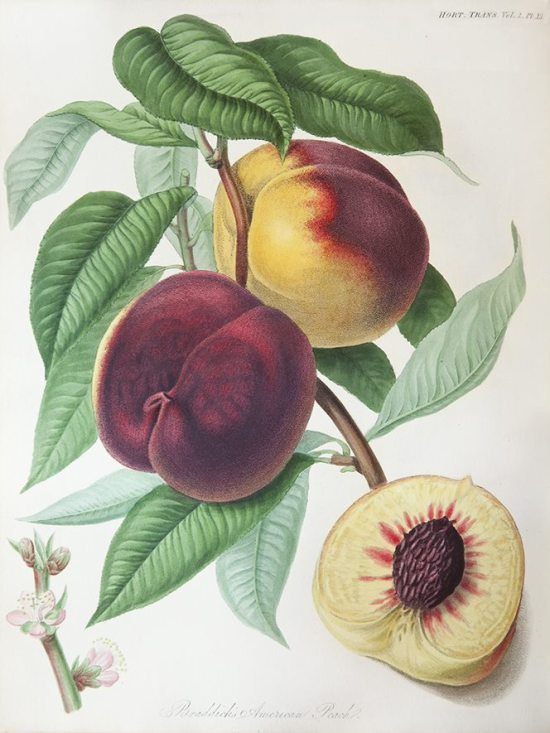 Anonymous, British. Braddick’s American Peach. Illustration from Transactions of the Horticultural Society of London, vol. 2, pl. 13, 3rd ed., 1822. Bartow-Pell Mansion Museum. John Braddick read his account of a new peach from North America to the Horticultural Society on November 7, 1815. While traveling in Virginia and Maryland some years previously, he had observed not only how peach trees were propagated but also that peach crops in those areas were used mainly for making peach brandy and feeding hogs. At Braddick’s request, an American correspondent sent him “a small bundle containing about two dozen trees” grown from peaches chosen for their “exquisite flavour.” Only one tree grew [which produced the peaches show here], and “is now growing vigorously in my garden at Thames Ditton.” 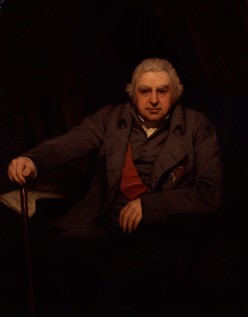 The Transactions were published in London from 1812 to 1848 by the organization that later became the Royal Horticultural Society (RHS). According to its charter, the society was formed “for the Improvement of Horticulture in all its branches, ornamental as well as useful.” The founders included Sir Joseph Banks (1743–1820), the great botanist and explorer who accompanied James Cook on his first voyage of discovery to the South Pacific; John Wedgwood (1766–1844), the son of potter and manufacturer Josiah Wedgwood; and Charles Francis Greville (1749–1809), a collector, mineralogist, horticulturalist, and member of Parliament, whose infamous mistress Emma later became Lady Hamilton and the lover of Admiral Nelson. Another important early member was the distinguished botanist Thomas Andrew Knight (1759–1838), who served as the society’s president and published many articles in the Transactions. 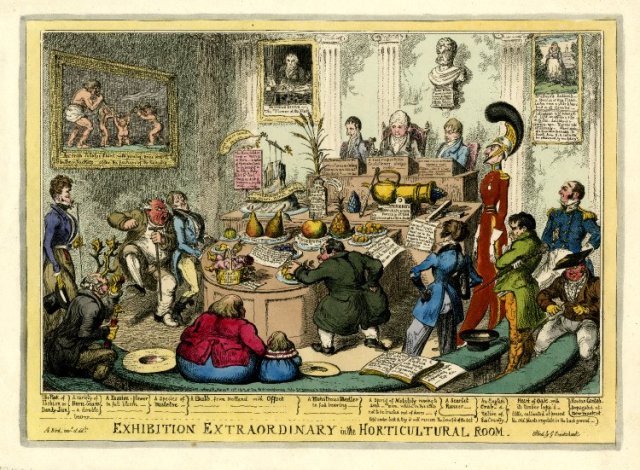 The 18th and 19th centuries produced some of the world’s great botanists and naturalists, including Linnaeus, Buffon, Audubon, and Darwin, to name a few. This was also a time when many learned societies, such as the Linnean Society and the American Philosophical Society, were formed. A palpable enthusiasm for outside-the-box thinking and Enlightenment principles created the perfect cocktail for an ever-evolving fount of new scientific knowledge and discoveries. And horticulture was part of that buzz. 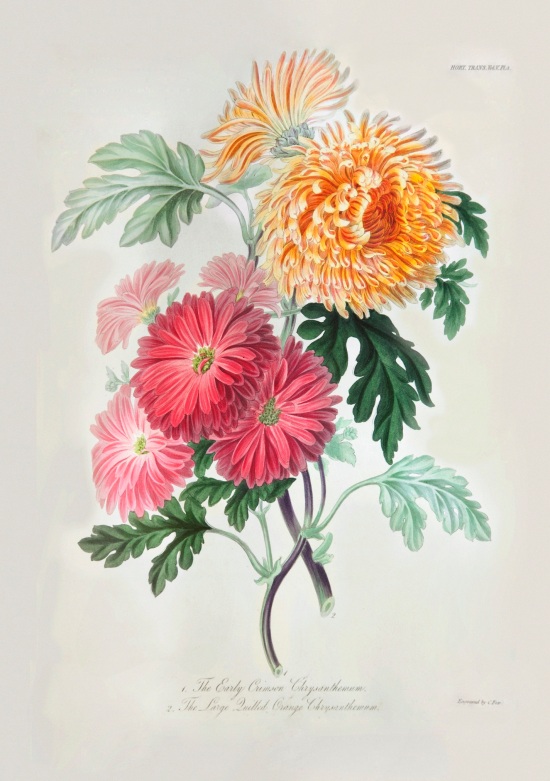 William Hooker, artist, and Charles Fox (1795–1849), engraver. The Early Crimson Chrysanthemum, The Large Quilled Orange Chrysanthemum. Illustration from Transactions of the Horticultural Society of London, vol. 5, pl. 3, 1st ed., 1824. Bartow-Pell Mansion Museum. On February 6, 1822, Joseph Sabine presented a paper describing some new varieties of Chinese chrysanthemums that had been imported in 1820 and were now thriving in the society’s garden at Chiswick.

The members of the Horticultural Society of London were at the forefront of this energy, and they sponsored expeditions around the globe in search of new varieties of plants. Landscape designer and former Bartow-Pell Conservancy president Marion Mundy described part of this quest in her text for BPMM’s 2009 exhibition The Age of Botanical Wonders: “The immense interest in growing tropical fruits and flowers in Europe’s northern climate was matched by efforts to improve and multiply domestic varieties. For fruits alone, a complex classification system was devised. Faithfully colored representations were necessary for scientific documentation of all of the new plants and for the developing commercial market.” 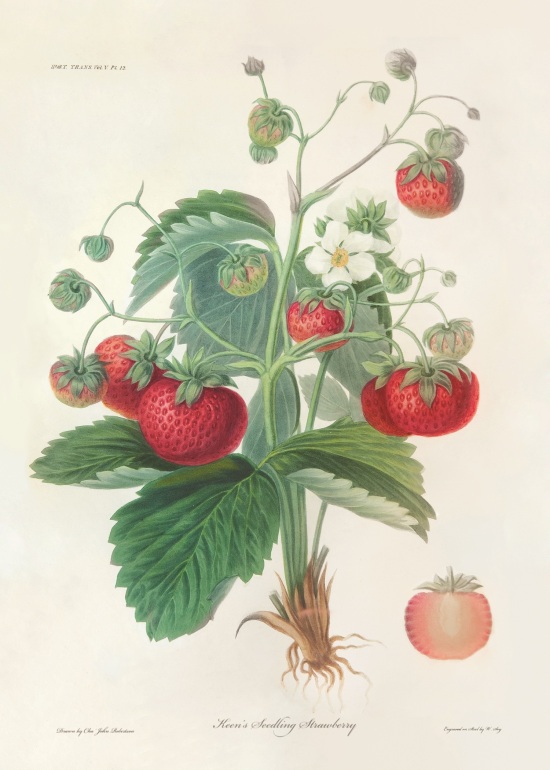 Charles John Robertson (active 1820s), artist, and William Say (1768–1834), engraver. Keen’s Seedling Strawberry. Illustration from Transactions of the Horticultural Society of London, vol. 5, pl. 12, 1st ed., 1824. Bartow-Pell Mansion Museum. “Mr. Keens also sent to the Meeting, on the 3rd of July, specimens of a new Strawberry, raised by himself. . . . The annexed figure, from a drawing made by Mr. Charles John Robertson, conveys a very perfect idea of the fruit.”

In the Transactions, horticulturalists published their research and wrote articles on an astounding variety of topics, such as the revival of an obsolete mode of managing strawberries, the glazing of hothouses and conservatories, the application of tobacco water in the destruction of insects, and the cultivation of new and rare plants at the society’s garden at Chiswick (on property they leased from the Duke of Devonshire). The organization also developed an extensive library (which in turn helped to inspire the library of the International Garden Club at Bartow-Pell in the early 20th century). Bartow-Pell’s editions of the first series of the Transactions were published between 1812 and 1830. 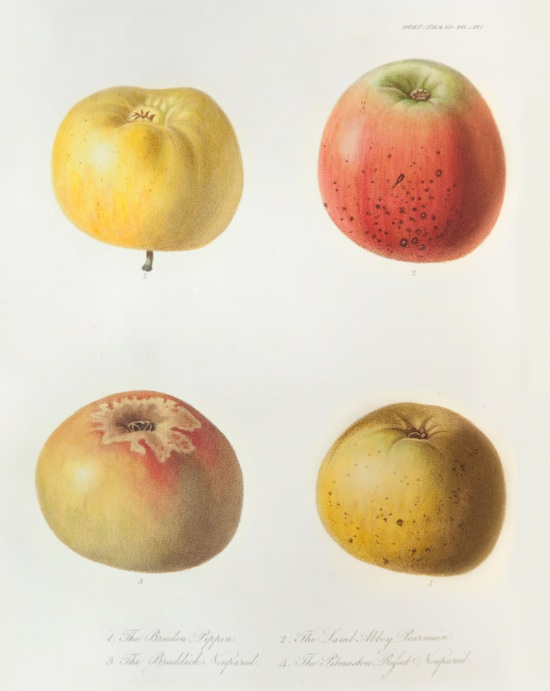 William Hooker (1779–1832). Four New Seedling Dessert Apples: The Breedon Pippin, The Lamb Abbey Pearmain, The Braddick Nonpareil, The Pilmaston Russet Nonpareil. Illustration from Transactions of the Horticultural Society of London, vol. 3, pl. 10, 2nd ed., 1822. Bartow-Pell Mansion Museum. The horticulturalist and naturalist Joseph Sabine (1770–1837), who was the society’s secretary, delivered his paper on new seedling dessert apples on January 5, 1819. “Mr. Hooker’s excellent figures of them will probably convey a more perfect idea of their appearance than my description.” Hooker was known for his fine depictions of fruit. 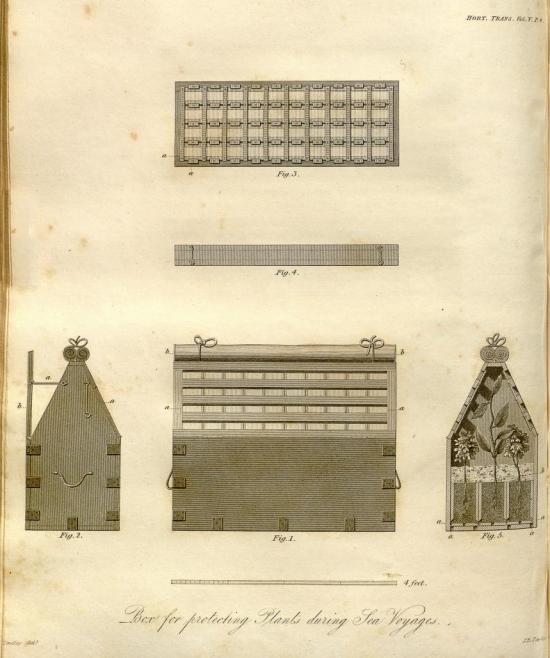 John Lindley (1799–1865), artist, and J. B. Taylor, engraver. Box for Potecting Plants during Sea Voyages. Illustration from Transactions of the Horticultural Society of London, vol. 5, pl. 4, 1st ed., 1824. Bartow-Pell Mansion Museum. On November 5, 1822, the prominent botanist John Lindley  spoke about the society’s practice of importing plants and the challenges of keeping them healthy during sea voyages. Among other things, he recommended transport in wooden boxes rather than earthenware pots. “Among the cases received by the Society this year from its numerous contributors were . . . a kind of portable green-house, constructed in a very superior manner to any I have seen elsewhere.” 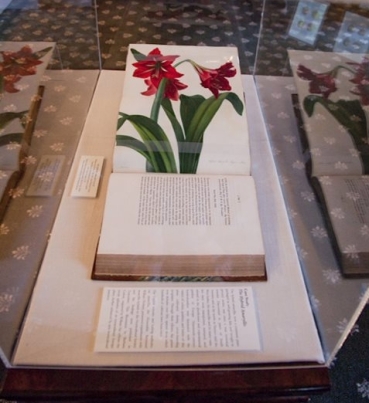 The Horticultural Society of London engaged some of the best botanical artists of the day to illustrate the Transactions, including William Hooker (1779–1832) and Barbara Cotton (active ca. 1810–30), and the engraver William Say (1768–1834). Furthermore, a sophisticated production method was used to enrich the plates. Marion Mundy wrote: “The engravings in the Transactions use a variety of techniques to achieve their remarkable brilliance, texture, and dimensionality. The aquatint was used to shade or produce a tonal effect over large areas. Stippling also helped to simulate varying degrees of solidity or shading. Finally, many of the plates in Transactions were further enhanced by hand coloring, literally creating unique works of art.” The plates, which were printed separately from the text, also include black-and-white engravings that depict the latest mechanical and architectural structures for horticultural use.  The handsome volumes were printed by William Bulmer (1757–1830), the typographer and printer known for his deluxe edition of Shakespeare, and sold by Hatchards, the storied London bookseller on Piccadilly that is still in business today. 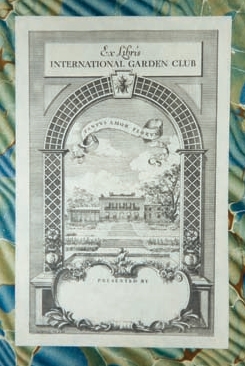 In 1914, Zelia Hoffman (1867–1929), a wealthy New York socialite, Anglophile, and garden enthusiast, founded the International Garden Club (IGC) on the model of the Royal Horticultural Society at the suggestion of the English garden writer Alice Martineau (ca. 1865–1956). The club leased the old Bartow mansion from the city of New York as its headquarters, and there, just like the RHS, the IGC established gardens, formed a library, and issued a horticultural journal. Although the Transactions are not listed in the 1917 inventory of books purchased for the IGC library with donations from members, they bear a bookplate indicating that the volumes were acquired during the club’s early years.

Botanical prints have often been viewed as merely decorative. Think of all the Redouté roses—and the gorgeous amaryllis from the Transactions—that have been reproduced for framed prints and boxes of note cards. But many images of plants originated as scientific records, and the Transactions illustrations are more than just eye candy.