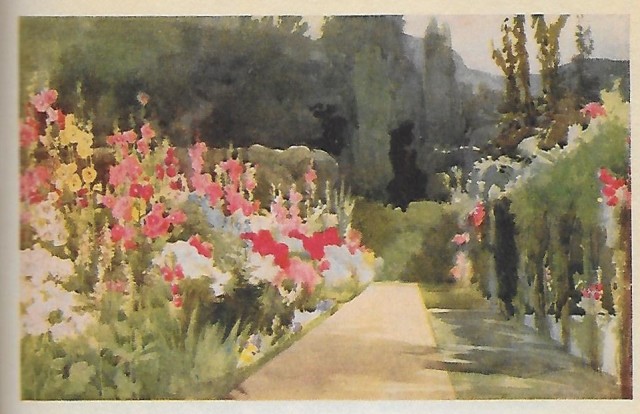 Margaret Waterfield, illustrator (1860–1950). Phlox and Hollyhock at Milton Court, Dorking. Illustration from The Herbaceous Garden by Alice Martineau (1913). The author used the term “herbaceous” in a loose sense to include “annual, biennial, and perennial plants . . . and boldly decide to include the best of everything in our border.”

On September 24, 1913, the British writer and garden designer Alice Martineau (ca. 1865–1956) set sail from Southampton for New York on the White Star Line’s legendary RMS Olympic, the enormous luxury ocean liner that was the sister ship of the ill-fated Titanic.

Mrs. Philip Martineau (as the press referred to her) was not well known in America, but she was traveling stateside to deliver a series of lectures on gardening to Yankee bluebloods. Furthermore, she had recently published The Herbaceous Garden—a book that was rooted in her experiences planning and planting her own gardens—which she wanted to promote to an American audience. The upper-class self-professed amateur had also been hired by her old friends John and Mary Beecher Longyear to design the gardens at their estate in Brookline, Massachusetts.

William W. Ernst. Mrs. Charles Frederick Hoffman Jr. in the Garden at Armsea Hall, 1909 or later. The Preservation Society of Newport County. Zelia Hoffman dances around a fountain in her gardens.

Somewhere along the way, Martineau met Zelia (Mrs. Charles F.) Hoffman (1867–1929), a wealthy American Anglophile, society hostess, and gardening enthusiast, and suggested to Mrs. Hoffman that she form an organization in the United States modeled after Britain’s Royal Horticultural Society. Hoffman quickly embraced the idea, and in March 1914, only a few months after Martineau’s 1913 visit, the new International Garden Club was formed. Zelia Hoffman led the organization, which soon leased the old Bartow estate from the City of New York to use as its headquarters and embarked on an ambitious to-do list. In short order, they recruited an impressive membership roster that included Nicholas Murray Butler (the president of Columbia University who was the IGC’s honorary president) and names such as Astor, Pell, and Vanderbilt. In addition, successful fundraising paid for the white-shoe architectural firm Delano & Aldrich to restore and update the Bartow mansion and create a beautiful formal walled garden. The IGC also published a journal, formed a horticultural library, and organized flower shows and other public events. Let’s not forget that the early 20th century was a golden age for the creation of garden clubs, such as the Garden Club of America, which was founded in 1913. “There never was a time when interest in gardening was so enthusiastic and widespread as at present. The International Garden Club is the result of this enthusiasm, given direction by Mrs. Philip Martineau.” (The Evening Post [New York], May 8, 1914)

Thanks to Martineau and Hoffman’s vision, Bartow-Pell was almost certainly saved from the wrecking ball in the 1930s, when Parks Commissioner Robert Moses ordered the demolition of the other remaining 19th-century country-estate mansions in Pelham Bay Park, which were in various states of disrepair. Today, Bartow-Pell is operated by the Bartow-Pell Conservancy and is a member of the New York City Department of Parks and Recreation’s Historic House Trust. 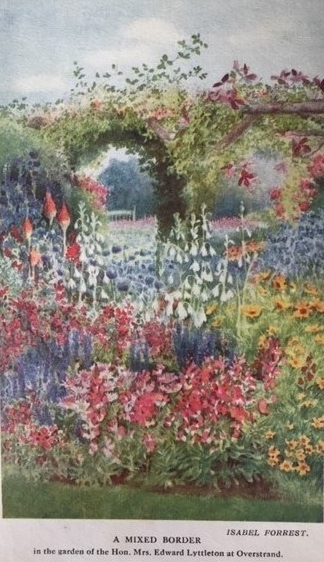 Isabel Forrest, illustrator. A Mixed Border in the Garden of the Hon. Mrs. Edward Lyttleton at Overstrand. Frontispiece to The Herbaceous Garden. “What an ugly name!,” Martineau exclaimed in Chapter XIII regarding the book’s title. “But would ‘My Perennial Garden,’ even if correct, sound any better, or ‘My Hardy Plant Garden’? So I must just leave it.”

Alice Margaret Vaughan-Williams Martineau was born in Wales around 1865 to Robert Vaughan-Williams and Sarah Jane Reid. Her father was a judge. In 1888, she married Philip Hubert Martineau (1862–1944), a solicitor and cricketer, and the couple had two sons. When her husband was knighted in 1933, she became Lady Alice. In the preface to The Herbaceous Gardener, Martineau wrote that she “grew up in a garden, and inherited doubtless the love for it.” She went on to write more books and articles on gardening, as well as several cookbooks (with wonderful titles such as Cantaloup to Cabbage and Caviare to Candy). Martineau, who moved in aristocratic circles, was also the author of Reminiscences of Hunting and Horses by a Fox-Hunting Woman and Roumania and Her Rulers. She had close ties to the Romanian royal family and dedicated The Secrets of Many Gardens to Romania’s Queen Marie, a granddaughter of Queen Victoria.

On September 21, 1913, the New York Times proclaimed: “Friend of Queen Coming as Gardener” to “give a course of drawing-room lectures.” Interestingly, Martineau was not the only foreigner to cross the Atlantic for speaking engagements in the heady days before the start of World War I. That same issue of the Times announced the arrival of the groundbreaking French couturier Paul Poiret (1879–1944)—known for his lampshade tunics, harem pantaloons, and hobble skirts—for an American lecture tour.

New-York Tribune, September 21, 1913. This is one of the newspaper headlines from Alice Martineau’s visit to the United States in the fall of 1913 when she was just starting her professional career but still considered herself an amateur.

“I have been in America twice on social visits. I am one Englishwoman who is simply in love with the country. I never hear the steamboat whistle but long for New York and the Hudson, where the air is like champagne,” gushed Martineau in the Times. But the feeling was not always mutual, at least after a controversial article entitled “Our Apathy to Gardens Astounds English Expert” appeared in the same newspaper on November 9, 1913.

But while she admits that a certain class in America is showing a really remarkable interest in gardens, she is even more impressed by the apparent apathy of the people in general. The almost total absence of cottage gardens astonishes her.

She went on to say that the “greatest mistake people make over here is in leaving things too much in the hands of the gardener,” accusing him of “atrocities” in the choice of flower colors, for example. Was Martineau merely a know-it-all aristo-dilettante? Or did she just need a lesson in tact? Maybe a bit of both, at least at the beginning of her professional career.

Martineau’s condescending—and ignorant—views ignited a tempest in a teapot and inspired snarky letters to the editor. Some American gardening experts bristled. For example, Martin C. Ebel, Secretary of the National Association of Gardeners, wrote: “This lady from abroad, with her mission to teach us, shows herself to be quite uninformed on American horticultural conditions.” He criticized her arrogance and lack of experience, complaining that she “comes to this country to undertake to advise against practical men whose experiences in gardening have been lifelong.” Some letters, however, praised the British visitor, such as one from “C.” of Tuxedo Park. Was this anonymous rebuttal penned by one of her society friends?

Mrs. Wharton in Her Garden (Sainte Claire du Chateau). Illustration from Gardening in Sunny Lands: The Riviera, California, Australia by Alice Martineau (1924). Introduction by Edith Wharton. In her foreword, the British author thanked her American friend: “Lastly, my special thanks are due to Mrs. Wharton, but for whose steady encouragement and practical help this book would never have been written.”

Although some American experts were offended by Martineau’s comments in the press in 1913, she had important connections in the gardening world. The influential British gardener and writer William Robinson (1838–1935), a proponent of the English cottage garden, was an important inspiration for Martineau and agreed to write an introduction to The Herbaceous Garden, which he did “with pleasure in the hope of helping the movement.” And the American writer Edith Wharton (1862–1937), a friend and fellow gardener, contributed an introduction to Martineau’s book Gardening in Sunny Lands (1924). Wharton wrote, “The author’s spoken counsels have already been so helpful in the making of my own garden that I feel sure my fellow-gardeners, and even those far more experienced than I, will welcome the appearance of such a book and find help in one or another of its stimulating suggestions.” At this time, Wharton was planting splendid gardens at Sainte-Claire du Château, the charming villa on the French Riviera that she was renting and would soon buy. 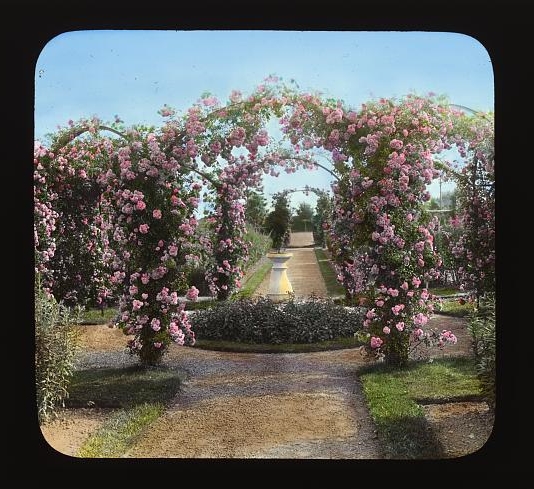 In May 1914, Alice Martineau returned to the United States to give more lectures and plan more gardens for wealthy American clients. “Mrs. Philip Martineau, of Hurst Court, England, . . . intends to spread the garden gospel still further in her present tour of the country,” declared the New York Tribune on May 10 in “Women Are Gardeners on Own Estates: Bloomer-Clad They Supplant Gardeners.” The article included an interview with Martineau and buzz about the new International Garden Club and its impact. At the end of June, Alice paid a visit to her friend Zelia at the Hoffmans’ Newport estate, Armsea Hall, a superb Beaux Arts mansion with spectacular gardens on Narragansett Bay.

Alice Martineau died in London at the age of ninety in 1956. Her bestselling book was her first one, The Herbaceous Garden, which ran into multiple editions in Britain and America but is now out of print. Thanks to the idea she planted with Zelia Hoffman, one of her most lasting legacies is still flourishing—the historic house and gardens at Bartow-Pell.