Fit for a Lord of the Manor: A Tester Bedstead Attributed to Duncan Phyfe

Posted on September 28, 2019 by mansionmusings

On November 29, 1955, Justine Bayard Erving—an unmarried descendent of the Van Rensselaer lords of the manor—died in a New York nursing home at the age of 73. The following year, a classical tester bedstead—later attributed to the influential cabinetmaker Duncan Phyfe (1770–1854)—was given to Bartow-Pell from her estate. Did it once belong to the donor’s great-grandparents Stephen Van Rensselaer III, the “last patroon” of Rensselaerswyck, and his wife Cornelia Paterson?

The Van Rensselaers were early Dutch settlers in New York and powerful landowners in the Albany area whose vast estate was known as Rensselaerswyck. The family amassed enormous wealth through a feudal-based system overseen by the patroon (the Dutch term for lord of the manor). The Van Rensselaers intermarried with other dynastic New York families such as the Schuylers, Bayards, Livingstons, and Van Cortlandts.

Stephen Van Rensselaer III (1764–1839) was a baby when his father began construction on a grand new manor house near the Hudson River in what is now the city of Albany. When the patroon died prematurely in 1769, his young son inherited the newly completed mansion, along with the entire estate. After the death of Stephen Van Rensselaer III in 1839, the house was extensively remodeled in the early 1840s by the architect Richard Upjohn. But in 1893, when railroad tracks and industrialization encroached on the property, the building was taken apart and partially reassembled at Williams College, where it housed a fraternity, among other things, until it was torn down for good in 1973. Today, the original entrance hall survives as a period room in the American Wing of the Metropolitan Museum of Art.

Woodwork and Wallpaper from the Great Hall of Van Rensselaer Manor House, 1765–69. Made in Albany, New York. The Metropolitan Museum of Art, Gift of Mrs. William Bayard Van Rensselaer, in memory of her husband, 1928

At the time of her death, Justine Bayard Erving (1881–1955), the bedstead’s donor, was a recent past president of the International Garden Club (IGC)—now the Bartow-Pell Conservancy—the organization that maintained the Bartow mansion as a historic house museum. (It is interesting to note that her relative Florence Van Rensselaer [1865–1957], who wrote a family history, served as IGC president during most of the 1940s.)

Because the details of the donor’s genealogy were not recorded when the bedstead was given to Bartow-Pell, the Van Rensselaer connection was forgotten until recently, when BPMM board member and Curatorial Committee Chairperson Carswell Rush Berlin—an expert in classical decorative arts who suspected that the bedstead was likely made by Phyfe— looked into Justine Bayard Erving’s ancestry. The provenance is particularly significant because her ancestor Stephen Van Rensselaer III was a patron of Phyfe’s. We know, for example that in 1811, Stephen III commissioned a library chair from the cabinetmaker. In addition, a portrait of him by the American painter John Wesley Jarvis (1780–1840) was also owned by Justine Bayard Erving at the time of her death and has a similar provenance. Carswell Berlin notes, however, that “while we know that Stephen III patronized Phyfe, the bed could also have come in through his wife’s family (the Patersons) or the family of their son’s wife, Sarah Bayard Roger, who we also know were Phyfe clients. The quality of the bed indicates the caliber of its maker, narrowing the possibilities to Phyfe and only a tiny group of his contemporaries, and the provenance linking the bed to such important families known to have patronized Phyfe strongly reinforces the likelihood that Phyfe was the maker, so that an attribution can be made with some confidence.”

Bartow-Pell’s bedstead dates from about 1815 to 1825 and is very similar to one that Nancy McClelland identifies in her book Duncan Phyfe and the English Regency (1939) as descending in the family of Duncan Phyfe’s daughter Eliza Phyfe Vail (1801–1890). In Duncan Phyfe: Master Cabinetmaker in New York, Peter Kenny writes: “However, based on the style of its ornament, as well as some tangential documentation, it seems just as likely that it was originally made for her parents.” Both bedsteads feature highly figured mahogany footboards with elaborate turned and carved posts consisting of leaves, rope spirals, and carved paw feet. However, the Phyfe family bedstead (illustrated on p. 225 of Kenny’s book) is more richly ornamented and has small Doric columns with gilded brass capitals on the footboard and carving on all four posts. (Headposts on tester bedsteads were usually plain because they were covered by bed hangings.) It makes sense that Phyfe would add special touches to a piece that he made for his own family. The late Berry Tracy, a curator in the American Wing at the Metropolitan Museum, gave a lecture at Bartow-Pell in 1966 and was the first scholar to attribute our bedstead to Duncan Phyfe.

The Phyfe and Van Rensselaer family bedsteads were made in a traditional English four-post form. The Scottish-born Phyfe presumably chose this style to suit himself and his wife, Rachel. As for Stephen Van Rensselaer III, his character was described as “conservative” by his biographer Daniel B. Barnard in 1839. “He was temperate in all things; in his personal indulgencies; in his personal predilections or prejudices; . . . in his new opinions or feelings, whenever he acquired them; in his love of the world.” It makes sense that his household furnishings would be traditional, even a tad old-fashioned.

Such high-post bedsteads—which follow the Anglo-American aesthetic of designers such as Thomas Sheraton (1751–1806)—contrast with contemporaneous “French” beds, which were modeled on ancient Roman day beds with scrolled ends. These were meant to be viewed from the side with the other side against a wall, like the one in Bartow-Pell’s collection that was made in New York City by Phyfe’s competitor Charles-Honoré Lannuier (1779–1819) between 1812 and 1819 for the merchant Isaac Bell and his wife, Mary Ellis Bell. Lannuier was a sophisticated interpreter of the Greco-Roman style, which had been popular in France since the French Revolution and was a powerful symbol of the ancient democratic ideals that were embraced by the new French and American republics. In fact, much attention has been given to a superb French bedstead made by Lannuier for Stephen Van Rensselaer III’s son Stephen IV (1789–1868) and his wife, Harriet Bayard (1799–1875)—also in the French (or “Grecian”) taste—which is now in the Albany Institute of History & Art. 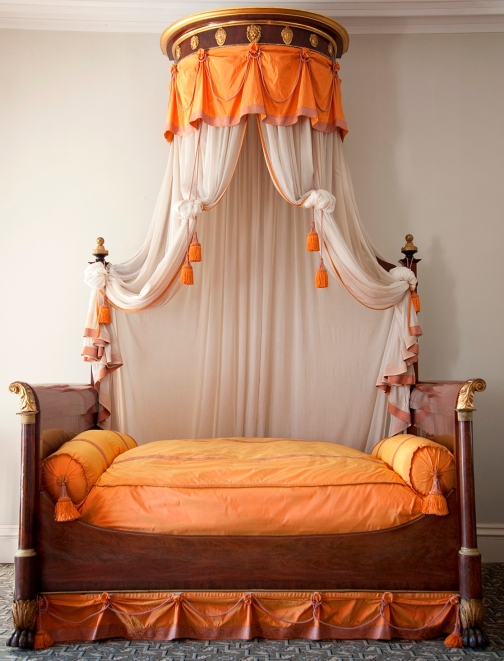 Phyfe and Lannuier vied for many of the same clients and were important leaders of a large cabinetmaking industry in New York City. Their patrons—who lived all along the East Coast—consisted of both landowning families and members of a burgeoning merchant class who were eager to furnish their houses with expensive objects of the highest quality, often as a means to display their wealth and taste. The two cabinetmakers initially produced pieces in opposing English and French styles but later influenced each other’s work. “Sheraton’s second book of designs, The Cabinet Dictionary (1803), and Thomas Hope’s Household Furniture (1807) introduce the new Grecian styles coming out of France. However, some clients preferred the more traditional English style (the style they were used to), and some the newer French or Grecian style,” notes Carswell Berlin. “The Phyfe bed represents Robert Adam’s neo-classicism and the Lannuier bed represents archaeological classicism. Thomas Hope, the most influential designer and arbiter of taste of the English Regency after the King himself, represented a rejection of Adam classicism in England, but not everyone adopted the Grecian style. Sheraton style continued to be influential for at least twenty years.” (Click here to see Berlin’s article on the design sources of American classical furniture.)

Illustration from An Encyclopedia of Domestic Economy by Thomas Webster and Mrs. Parkes (American edition, 1845). “Bed-curtains are made of various materials, as silk, damask, moreen, chints [sic], or dimity. . . . Chints [sic] is generally preferred, being more easily washed; and curtains of it are usually lined with a thin glazed cotton, generally dyed plain.”

Bed hangings were among the most expensive items in a well-to-do household. For example, four-post bedsteads required “a top, a back, two head curtains, two foot curtains, one top outer and one top inner valance, one bottom valance, and sometimes extra drapery laid on the back of the bed,” according to The Workwoman’s Guide (1840). Sumptuous bed draperies required many yards of fine fabric. Catharine Beecher advised readers of A Treatise on Domestic Economy (1841): “High-post bedsteads are best, as it is often important to hang . . . curtains to protect from cold currents of air. It is in good taste to have the [bed] curtains, bedquilt, valance, and window-curtains of similar materials.” In the 1828 American edition of Domestic Duties, or Instructions to Young Married Ladies, Mrs. William Parkes wrote that “bed-hangings are now, generally, either of moreen [a strong cotton or wool fabric], or of chintz lined with coloured calico. Moreen is very serviceable, and is well suited to cold situations; it requires no lining, and therefore, is less expensive than chintz, though not so pretty.” Bartow-Pell’s reproduction bed hangings are made of glazed cotton chintz in the Oriole pattern from Brunschwig & Fils, a historic design based on an example in the collection of the Winterthur Museum.

According to the custom of the period, Bartow-Pell’s bed hangings and window treatments are made of the same fabric. “In general, the material and colour of window curtains should be the same as that of other drapery in the room; for example, as . . . bed curtains in bed-rooms.” John Claudius Loudon, 1835

Our tester bedstead has been slumbering quietly in an upstairs bedchamber at the museum since 1956. But it has a story to tell—one with ties to the Van Rensselaer family and to an important furniture maker. Besides, how fitting that such an object would end up at Bartow-Pell, a property that once belonged to another legendary family, the Pells—the lords of the manor of Pelham—and their descendent Robert Bartow.