New York City mayor Fiorello La Guardia smiled broadly at photographers as his motorcade reached the historic Bartow mansion at 3:30 p.m. on Thursday, July 2, 1936. The diminutive dynamo arrived for his official duties at the new summer city hall in Pelham Bay Park accompanied by his sometime nemesis Bronx Borough President James Lyons, who had joined the mayor and his entourage at the Bronx line as they traveled from Manhattan.

The mayor’s move to the northern reaches of the city allowed him to spend some nights in Westport, Connecticut, where his wife and two children were summering. “He plans to take no regular vacation this summer and his visits to Westport will provide all the recreation he expects to get,” the New York Times reported on June 26, 1936. By relocating to the Bronx, La Guardia was also reminding constituents that there was more to New York City than Manhattan. And in the years before air conditioning, the city sweltered in July and August. Cooler sea air and the park’s acres of grass, shade trees, and marshland helped make the heat somewhat bearable. “From July 2 until Labor Day Mayor La Guardia forsook the City Hall, traditionally a summer hot box, and worked in the Bartow Mansion in Pelham Bay Park, facing breezy Long Island Sound. His office was cool and spacious, with twenty [sic]-foot ceilings, old paintings on the walls, and a view of a terraced garden with fragrant phlox, petunias, water lilies, roses,” the Times gushed at the season’s end. A reporter wrote that temperatures were about 15 degrees cooler inside the mansion, with its two-foot-thick stone walls.

La Guardia’s obituary noted in 1947 that he “established a series of Summer City Halls, at the Bartow Mansion in the Bronx, in the old Chisholm mansion in College Point Park [Queens], and at the former Arrow Brook Golf and Country Club in Queens. When the city purchased the Gracie Mansion on the Upper East Side of Manhattan, it became the Mayor’s residence.” Today, both Bartow-Pell and Gracie Mansion are affiliated with the Historic House Trust of New York City. 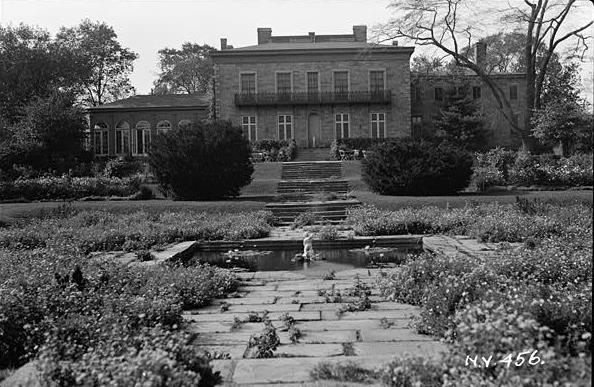 The International Garden Club had leased the old Bartow mansion from the city in 1914 and hired the architectural firm of Delano & Aldrich to restore the house and create a formal walled garden. Because many IGC members decamped to their country homes during the summer, the clubhouse was largely unused in July and August. After the mayor made plans for his summer city hall in 1936, a flurry of activity began at the mansion.

Preparations went on for the Mayor’s arrival at his summer headquarters tomorrow or Thursday. Three policemen were assigned to the mansion, two mounted and one on foot. Visitors were politely asked whether they had official business at the mansion before they were permitted to proceed [past the sentry booth]. Telephone lines were going in for the Mayor and newspapermen with him, and two Park Department employes [sic] were added to care for the grounds surrounding the mansion. Drink stands at the near-by Pelham Split Rock golf course got ready for a rush of business. New York Times, June 30, 1936

A teletype machine was installed at Bartow to transmit lengthy official documents to City Hall downtown. Journalists on the beat got creative. “One newspaper plans to use carrier pigeons to carry stories and pictures from the Summer City Hall to its offices in downtown Manhattan,” the Times divulged on June 27. 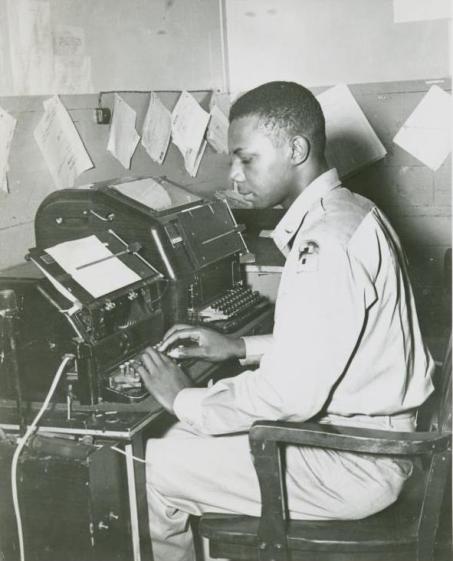 Teletype machines, which were telephonic devices similar to typewriters, were used to transmit documents. Private James C. Lee was photographed using one in 1948 at Camp Edwards, Kentucky. Schomburg Center for Research in Black Culture, Photographs and Prints Division, The New York Public Library

The mansion’s small parking lot was a jumble of cars, including an eight-year-old converted police department patrol wagon that carried visitors from the Pelham Bay Park subway station to the summer city hall. Herman Spumberg drove the shuttle, which was labeled “City Hall Bus—Official Business.” The mayor’s Depression-era frugality was well intentioned, but the makeshift van broke down after about a month when Mr. Spumberg was turning into the Bartow driveway and its steering mechanism failed. The vehicle was towed to a police garage for repair.

The summer city hall was not popular with everyone. A few days before the move, the Times reported that 200 unemployed workers demonstrated at City Hall Park to ask for an increase in their public assistance payments and demand that the mayor “remain near the people.” The picketers’ spokesman complained, “He’s not the Mayor of Pelham Bay. He’s the chief executive of New York City.” The article also discusses the challenges faced by the mayor’s staff—“mosquitos, high fares, lack of restaurants, and inaccessibility.” The trip on public transportation from Times Square, for example, took about an hour and a quarter each way and involved subways, buses, and walking. Lunch options near the summer city hall were slim. “Mr. and Mrs. John Robertson, caretakers of the mansion, will look after the Mayor, but others must make the best shift they can.” Inaccessibility was an annoyance for some but beneficial for Mayor La Guardia, who “expects to get more work done in a shorter time because of the fewer number of interruptions.”

The mayor was the hero of a real-life fairytale on July 13, a few days after New Yorkers reeled in record heat. (The story evokes 1930s motion picture shorts starring Alfalfa and the other kids from Our Gang.) A group of boys, whose neighborhood playground was controlled by aggressive teens, decided to do something about the situation and went straight to the top brass for help.

Seven tired and begrimed youngsters trudged four miles from their homes to the Summer City Hall yesterday to ask Mayor La Guardia for a playground in their section of the Bronx and found their wish gratified as if Aladdin had rubbed his legendary lamp. The youngsters, ranging in age from 9 to 12 years, were on the grounds of the Bartow Mansion before the Mayor arrived. . . . When the Mayor came they told him what they wanted. . . . “Wait a few minutes,” he said, “and I’ll see what I can do for you.” While seven pairs of dusty shoes swung hopefully beneath as many chairs in the Mayor’s reception room, the Mayor got the Police Department on the telephone. At his request the police made a play area of Buck Street between Seddon Street and Zerega Avenue. . . . When the Mayor told them the location of their new play street, they were highly elated. Their delight reached a higher point when . . . the Mayor’s assistant secretary gave them each a nickel to save them the long walk home. They rode down to the Pelham Bay Park subway station free in the City Hall bus and took the subway home from there. New York Times, July 14, 1936

There were other big happenings in Pelham Bay Park during the summer of 1936. Orchard Beach, an ambitious construction project under Parks Commissioner Robert Moses that was chiefly funded by the Works Progress Administration (WPA), was one of a number of new aquatic centers in the city. The site, which was partially visible across the water from the old Bartow property, comprised a mile-long seawall, a crescent-shaped manmade beach, a Moderne-style bathhouse, a promenade, concession buildings, and parking for thousands of cars. In July 1936, about a year before the recreation facility was completed, the beach partially opened to the public amidst a great deal of fanfare. Mayor La Guardia addressed 10,000 people at the dedication ceremony, in which he and Commissioner Moses exchanged “thrusts,” according to the Times. In the evening, the fireworks continued. But this time, instead of from the podium, the pyrotechnic display—which was viewed by 15,000 people—was spectacularly launched from a barge 1,500 feet offshore.

The mayor’s press corps worked from an office specially made for them in the basement of the mansion. The wooden cubicles (replete with whimsical doodles on the adjoining plaster wall) and toilet stall remain today. This subterranean work space was often the coolest part of the building in summer. Russell Owen, who won a Pulitzer Prize in 1930 for his news reports on Byrd’s Antarctic expedition, visited the summer city hall in August to interview the mayor. “Certainly the atmosphere is very business-like,” he wrote, “even if two reporters come in laughing and carrying large wooden balls with which they have apparently been bowling on the green.” 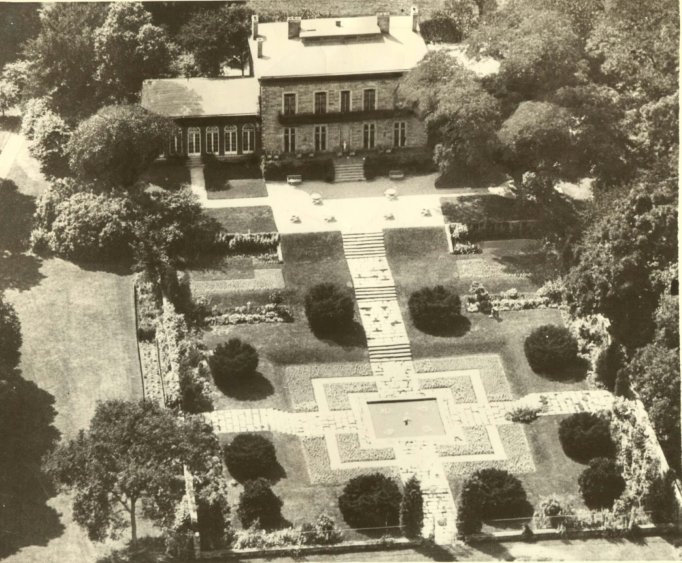 The sizzling summer of 1936 was a time when New Yorkers favored white shoes, bare heads, and Panama hats. Billie Holiday recorded “Summertime,” and Jesse Owens made history at the Berlin Olympics. The ill-fated Hindenburg broke records. President Franklin D. Roosevelt and his New Deal lent a hand to Depression-weary Americans while fascism brewed in Europe. For Mayor La Guardia, this was a time of “marked change in him, with nervous pressure relieved, since callers are relatively few, and his prevailing mood in the informal atmosphere in which his work is carried on is gay and bantering,” the Times enthused in August. The mayor had the chance to occasionally grab a rare moment to “sit alone and invite his soul,” wrote journalist Russell Owen, who chatted with La Guardia as the mayor sat at his desk and mused, looking through open French doors at the pretty garden and drinking coffee from a blue china pot. “The air’s better,” he said, “but the atmosphere is the same.”