Chicken Pie and Blindman’s Buff: What You Might Not Know about an Old-Fashioned Thanksgiving

Posted on November 14, 2016 by mansionmusings

Pies, pies, and more pies. It must be Thanksgiving in the nineteenth century.

In addition to pies for dessert, chicken pies were a favorite Thanksgiving staple. They were served during the main course, which featured roasted turkey in the starring role. Like today, “the consumption of gobblers” was “prodigious” (New York Herald, 1868). 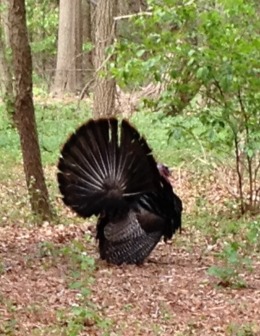 The roasted turkey took precedence on this occasion, being placed at the head of the table; and well did it become its lordly station, sending forth the rich odour of its savoury stuffing, and finely covered with the frost of the basting. . . . A goose and pair of ducklings occupied side stations on the table, the middle being graced, as it always is on such occasions, by that rich burgomaster of the provisions, called a chicken pie. This pie, which is wholly formed of the choicest parts of fowls, enriched and seasoned with a profusion of butter and pepper and covered with an excellent puff paste is, like the celebrated pumpkin pie, an indispensable part of a good and true Yankee Thanksgiving. Sarah Josepha Hale, Northwood, 1827

Sarah Josepha Hale (1788­–1879) later became the high-profile editor of Godey’s Lady’s Book. At a time when Thanksgiving Day was determined by individual states, she used her position to encourage the federal government to fix a standard date. Finally, in 1863, President Lincoln issued a proclamation declaring the “last Thursday of November” as the official observation of Thanksgiving.

Ready for a good sermon? For many people in the nineteenth century, Thanksgiving Day started with a morning church service. In 1861, a reporter for the New York Herald wrote: “All the churches will hold forenoon service, and the pastors, it is expected, will treat their congregations with sermons a little above the common order.” Organists and choirs provided special music, and alms were collected for the poor. Harriet Beecher Stowe wrote in Oldtown Folks:

Great as the preparations were for the dinner, everything was so contrived that not a soul in the house should be kept from the morning service of Thanksgiving in the church, and from listening to the Thanksgiving sermon, in which the minister was expected to express his views freely concerning the politics of the country . . . But it is to be confessed that, when the good man got carried away by the enthusiasm of his subject . . . , anxious glances [were] exchanged between good wives . . . [who had] a tender reference to the turkeys and chickens and chicken pies which might possibly be overdoing in the ovens at home. 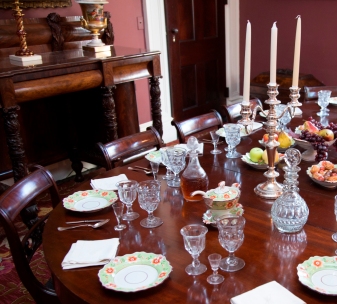 The dining table at Bartow-Pell, set for the fruit course with the tablecloth removed

Time to eat! In well-to-do households like that of the Bartows, the table was covered with a snowy white damask tablecloth and set with glittering crystal, gleaming silver, and decanters placed in the corners of the table and filled with imported wines. (Alternately, currant wine and cider were popular and affordable beverages that are frequently mentioned in period sources.) Sometimes two damask tablecloths were used—the top cloth was removed after the main course to reveal a clean one for the pastries and confectionaries. At Thanksgiving, pies were always on the dessert menu, but did you know that plum pudding was a traditional American dish? At the end of the meal, a fruit course was served on the bare mahogany table (but this practice was outdated by the late nineteenth century). 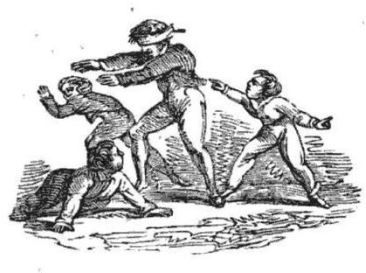 Boys play blindman’s buff in this illustration from The Boy’s Own Book (Boston, 1847). 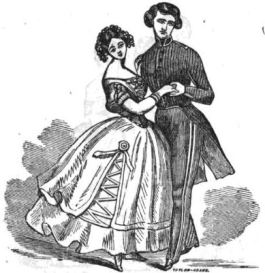 Now, how about a game of blindman’s buff? Or maybe a polka in the parlor?

The dinner being cleared away, we youngsters, already excited to a tumult of laughter, tumbled in to the best room, under the supervision of Uncle Bill, to relieve ourselves with a game of ‘blind-man’s-buff.’ Harriet Beecher Stowe, Oldtown Folks, 1869

There was the annual game of blind-man’s buff, where the oldest were happy to become children again. . . And when the youngest of the party had reluctantly retired, and the evening circle was enlarged by the addition of a few invited friends, the merry dance succeeded . . . and many a laughing girl took her partner. T. Gray Jr., “New England Thanksgiving,” The Boston Book, 1836

Thanksgiving was a multigenerational holiday and a time for families to come together, just as it is today. In 1870, for example, the New York Herald described the day:

The festival was extensively celebrated yesterday in this city, and, indeed, throughout the country. Families were reunited after many months of separation . . . while stories of the doings of the past year fell from the lips of loved wanderers and brightened or darkened the faces of those who listened.

The temperance movement used family holidays such as Thanksgiving as a way to remind people about the evils of drink and promote their campaign against alchohol consumption, warning that intemperance threatened families, morality, and happiness. On December 1, 1850, the Journal of the American Temperance Union encouraged families to sign a temperance pledge at Thanksgiving:

There are family gatherings . . . where intemperance has done its bitter work . . . We tremble for the man who . . . will put out the light and joy of a single family . . . In these family gatherings let the pledge be signed, and signed by all. . . . Let no child hereafter say, through our neglect my father is a drunkard, and no stain be fixed on our national escutcheon. 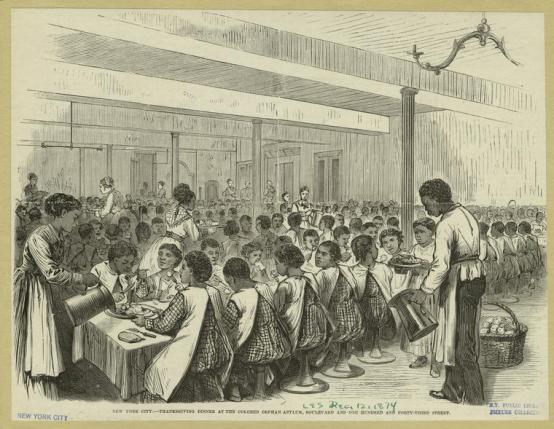 Let’s not forget the poor and other marginalized populations. Charity was a big deal at Thanksgiving. As Harriet Beecher Stowe put it, “Thanksgiving time was the time for errands of mercy and beneficence through the country.” And in his Thanksgiving Day sermon in 1868, her brother, the Reverend Henry Ward Beecher, exhorted his Brooklyn congregation to “go hence . . . and with a gentle heart and liberal hand dispense your charities to the poor and needy.” On the same day, according to the New York Herald, seven hundred pounds of poultry were served at the Blackwell’s Island Asylum, and recent immigrants on Ward’s Island enjoyed a good dinner and “various kinds of entertainments.”

Pumpkins from our Children’s Garden

Let’s get ready for the big day (and bake some pies)!

Come, nephews and brothers, no won’ts and no can’ts;

Put business, and shopping, and school-books away;

The year has rolled round, it is Thanksgiving-day.

Come home from your factories, Ann, Kate, and Ruth;

From the anvil, the counter, the farm come away;

Home, home with you, all, it is Thanksgiving-day.