Posted on November 15, 2018 by mansionmusings

Stories about the effects of cold weather in the 19th century are plentiful. Ink sometimes froze. Pitchers cracked and broke overnight when the water in them turned to ice. Bitterly cold wind made its way through poorly sealed windows and doors. Frosty mornings could make bathing torture. 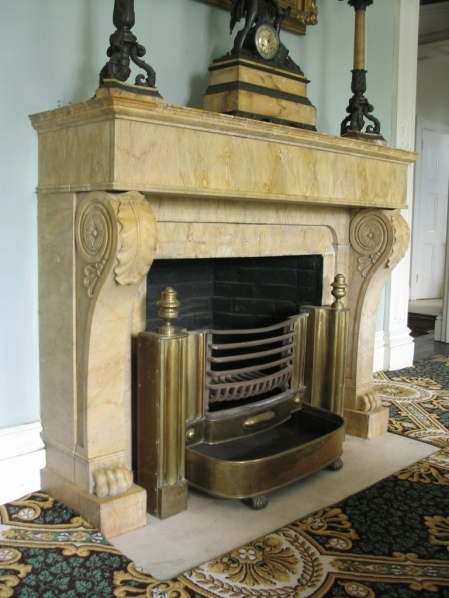 Coal grate, ca. 1840. American or English. Brass and wrought iron. Bartow-Pell Mansion Museum, Purchase, The Bartow-Pell Landmark Fund, 1982.01. This coal grate is one of a pair in BPMM’s double parlors. The grates were saved from a now-demolished mansion on Montgomery Street in Newburgh, New York, where they were fitted into the fireplace masonry.

So how did Americans stay warm? The answer should be simple. Didn’t people just light fires? Actually it was much more complicated than that. As is well known, the 19th century was an era of new technologies, and home-heating practices changed accordingly during this time.

Fireplaces and stoves were the primary home-heating methods. Although hot-air furnaces and systems using steam and hot water were available, their use was mostly limited to progressive, wealthy homeowners and to industrial and institutional consumers. Fireplaces, of course, were ubiquitous, and firewood had been used for hundreds of years. But coal—which was burned in specially designed fireplace grates—emerged as an alternative fuel for the hearth.

Stoves provided a more efficient way to distribute heat than the open hearth. Some were made exclusively for wood, but coal-burning stoves—which could also burn wood—had firebrick-lined sides and a grate for the coal. Retailers offered many choices. The United States patent list published in 1847 includes dozens of stoves for heating homes, and these patents dramatically increased in the 1830s and ‘40s.

Cast-iron parlor stoves were popular in prosperous mid-19th-century households. A fine example from about 1840 graces Bartow-Pell’s entrance hall and is on long-term loan from the Metropolitan Museum of Art. A flue opening in the wall behind the stove—now covered with plaster—allowed a stovepipe connection for ventilating dangerous fumes. This evidence reveals that the Bartow family, who moved into their new house in 1842, had a similar stove to warm their front hall. 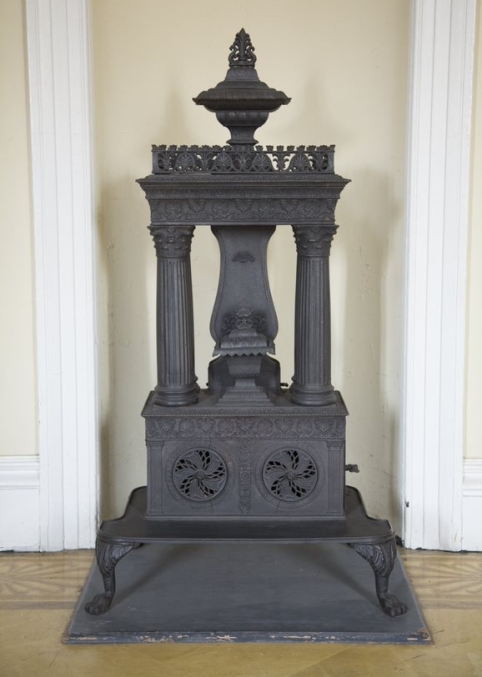 Column parlor stove, ca. 1840. American, probably made in Albany or Troy, New York. Cast iron. Lent by the Metropolitan Museum of Art, Gift of Mrs. Ellen Goin Rionda, 1953 (53.132.1a–i). Photo by Richard Warren. Hot air circulated in the columns of stoves such as this one in BPMM’s entrance hall, and the flames were visible behind the firebox’s two front doors. Stoves like this burned wood and possibly charcoal; the fuel doors were located on the side. A stovepipe would have connected to a flue in the wall for ventilation. The architectonic design of this handsome parlor stove boasts a myriad of fashionable classical motifs that reflect the high Greek Revival style of the Bartow mansion’s interiors.

The parlor stove at Bartow-Pell is typical of those made in Albany and Troy, New York, where a world-renowned cast-iron stove industry flourished in the mid-19th century. Here, raw materials, such as iron ore, were readily available. An efficient transportation network, including the Hudson River and the Erie Canal (which opened in 1825), provided convenient shipping of industrial supplies and finished goods. The Albany and Troy area also had a talented pool of innovative designers with technological expertise who were known for their ornamental and architectonic designs in the latest taste. The stove at Bartow-Pell, for example, reflects the Greek Revival style of the mansion’s superb interiors. The classical urn above the firebox would have been filled with water and used as a humidifier. According to Tammis Kane Groft, author of Cast with Style: Nineteenth-Century Cast-Iron Stoves from the Albany Area, the water was often “spiced or perfumed,” which helped to offset the unpleasant smell and dry air caused by the hot stove.

Box stove, ca. 1844. Treadwell & Perry, Albany, New York. Cast iron. Bartow-Pell Mansion Museum, Gift of John I. Mesick, 2007.10. Box stoves were first made in the 18th century, but the design had been improved by the 1840s when this example in Bartow-Pell’s carriage house was made. One feature of these wood-burning stoves is a front plate to catch ashes and debris when the fuel door is opened. Ornamental moldings on stoves like this one often derive from contemporary architectural pattern books.

Lighting fires was often a bother. To start a new blaze in the morning, or if a poorly maintained fire went out, live coals from the kitchen stove could be used. In The American Woman’s Home (1869), the Beecher sisters wrote: “Those who are taught to manage the stove properly keep the fire going all night, and equally well with wood or coal, thus saving the expense of kindling and the trouble of starting a new fire.” For more on lighting fires in the 19th century, click here. 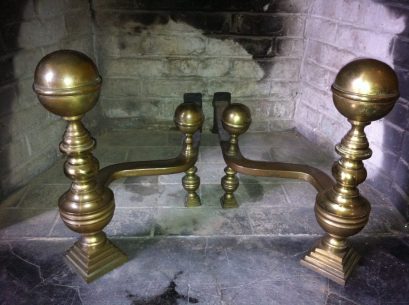 “The best wood for fuel is hickory, and the next is oak. Locust is also very good; so are walnut, beech, and maple. Birch is tolerable. Chestnut wood is extremely unsafe from its tendency to snap and sparkle. . . . Pine wood is of little value as house fuel [because of] . . . its resinous qualities,” advised Eliza Leslie in her Lady’s House-Book: A Manual of Domestic Economy (1850). The high price of hickory was offset by its long-burning qualities. Despite some concerns over diminishing timber stocks, the robust firewood trade provided not only fuel for consumers, but also jobs for woodchoppers, suppliers, inspectors, wholesale and retail dealers, wood peddlers, shippers, and “carters.” According to “The Firewood Trade,” an article in the New York Herald published on May 26, 1856, business was booming. 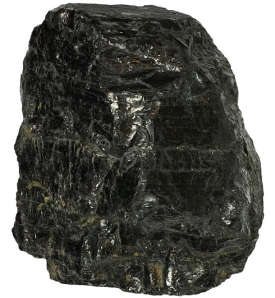 Coal, however, provided a less expensive, more efficient, and more reliable alternative to wood. But change can take time, and people—mostly the women who tended domestic fires—had to learn the new techniques that were required to burn coal. Nevertheless, by the mid-19th century, coal consumption in the home had risen to record levels. Anthracite (“hard”) coal, commonly found in Pennsylvania, was more expensive but was preferred over bituminous (“soft”) coal. Eliza Leslie counseled, “In buying anthracite coal . . . that of the best quality is eventually the cheapest. It goes further, lasts longer, gives out more heat, with less waste. . . . Endeavor to obtain coal that is hard, bright, and clean-looking.” Bituminous coal, she wrote, “is much softer than the anthracite, emits more smoke, produces more dust and ashes, and the heat is far less intense, though the blaze is very bright.” An article in The American Farmer from December 15, 1826, talks about anthracite’s new popularity:

The use of the anthracite, as a fuel, has been so generally approved, that it seems likely to supersede, to a great degree, all other substances, both in manufactories and families. In almost every case, where it has been tried for parlour use, it may be said to have gained the preference over even the best hickory wood; and it is not unlikely that at no distant day, it will obtain an equally firm footing in our kitchens.

Coal, however, was dirty, and it polluted both homes and cities. 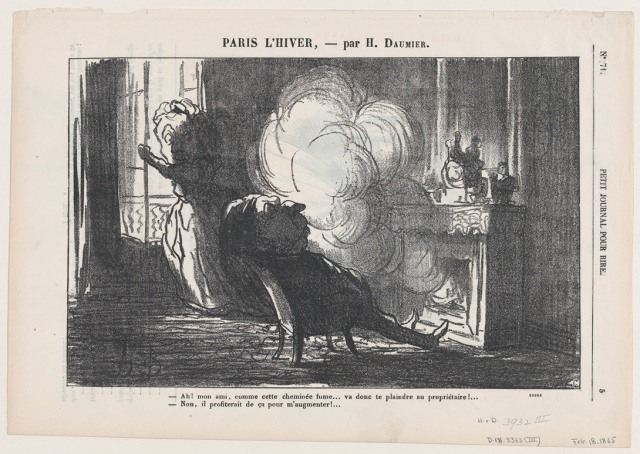 Honoré Daumier (French, 1808–1879). Paris l’hiver (Paris in Winter), Le Petit Journal pour Rire, February 18, 1865. Lithograph on newsprint. The Metropolitan Museum of Art, Harris Brisbane Dick Fund, 1936. This cartoon by the well-known French caricaturist Honoré Daumier satirizes smoky and sooty fireplaces, a universal problem in the 19th century. Here, a prostrate gentleman is enveloped in a cloud of smoke as his companion airs out the room, but he says that he will not complain to the landlord, who would surely use it as an opportunity to raise the rent.

A few years ago at Bartow-Pell, when the Sierra Club was clearing invasive vines from the property, an astute volunteer recognized some old coal underneath the tangle of roots. These pieces of anthracite coal were promptly turned over to the museum staff and provide fascinating evidence of 19th-century heating practices at the mansion. 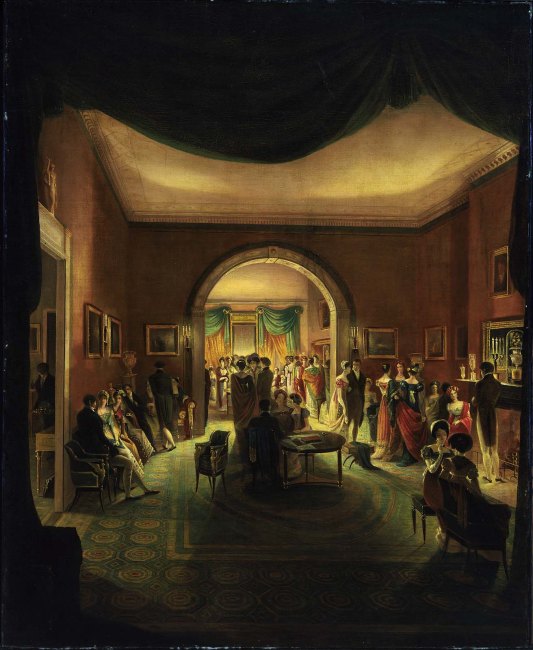 Henry Sargent (American, 1770–1845). The Tea Party, ca. 1824. Oil on canvas. Museum of Fine Arts, Boston. Andirons and a blazing wood fire are just visible at the right of this elegant scene in the double parlors of what is perhaps the artist’s own home in Boston. Wood fires were considered to be more welcoming and “cheerful” than ones made with coal.

Many households likely burned both coal and wood. After the use of coal became widespread, “cheerful wood fires” were romanticized, and their appeal was touted, especially by affluent homeowners with servants. A chatty debate on wood and coal enlivens a fashionable household in “Conversations by the Fire-side” (February 1839) by Sarah Josepha Hale, the editor of Godey’s Lady’s Book:

“There is nothing in nature so charming as a bright wood fire!” exclaimed Mrs. Marvin. . . . The village school-master, who was spreading his hands to the genial blaze, [rejoined], “Wood is the natural material for the domestic fire, and I marvel that those who can obtain it, will ever burn that disgusting substitute, coal.”

“Oh! I like a coal fire, a good anthracite fire, that will last bright and warm as the summer’s sun, through a whole winter’s day, and the night too, for that matter,” said Ellen Marvin quickly. “Now a wood fire has no constancy of character; it is all blaze one minute, and all ashes the next. You can never leave it with safety, nor trust to its steadiness for an hour.”

“Unblest truly,” said Mrs. Marvin, “as I think every body must be who lives in the smoke and dust of soft coal, or the dry, withering heat of the hard. I passed a fortnight in Boston, last winter, and never saw a cheerful, blazing wood fire in all that time; I was quite home-sick.” 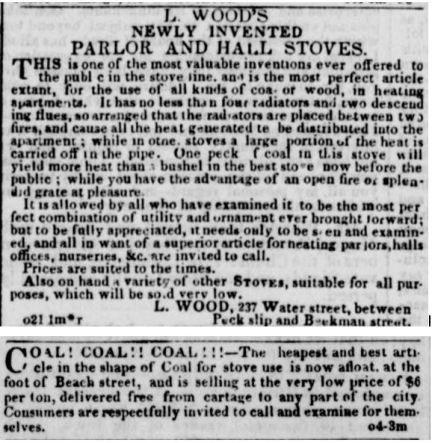 Advertisements for parlor and hall stoves (top), New York Herald, November 5, 1842, and coal (bottom), New York Morning Herald, November 14, 1839. Although many consumers preferred coal to heat their homes, others favored wood. (Both fuels could be used in fireplaces and stoves.) Coal was much more efficient, but it dried out the air. The author of “The Haunted Adjutant” in Graham’s Monthly Magazine (1845) had this to say on the subject: “But you must take a glance at the roaring wood fire which goes crackling up the chimney, and acknowledge its superiority over the pitiful grates and subterranean furnaces which are drying up the present generation to mummies. If flesh be indeed grass, anthracite [i.e., coal] will soon desiccate the American public into a very creditable hortus siccus [collection of dried plants].”

Coal grates are removed by an inept housewife in “Barclay Compton, or the Sailor’s Return” (December 1842), a Godey’s short story by Eliza Leslie. “Oh! I found a coal fire quite too much trouble,” explains the protagonist’s indolent wife upon his return home following a long absence. “It was so hard to get it to burn, and it was always going out. . . . Every one of them [the women servants] hated coal fires, and I got out of patience with coal myself. So I had the grates taken down. . . . And we burnt wood the remainder of the winter.”

The “domestic hearth” was a potent symbol of the family circle and even of Christian values. Moreover, children learned important lessons around the family fireside that extended beyond the home and into society at large.

Thus it has been—here in the family circle—at the domestic hearth—amid that sacred retirement—around the family altar, that the good citizen of all times and countries, has been educated, and trained, and fitted for the upright and honorable discharge of the duties incumbent upon him from his admission into the great social family. New York Herald, February 7, 1844

Americans no longer depend on 19th-century methods to heat their homes. But just like coal consumers in the 19th century, we still enjoy a “cheerful wood fire” at the “domestic hearth.”

2 Responses to Cheerful and Bright (and Smoky): Staying Warm in 19th-Century American Homes